In the first of Saturday’s two semifinal matchups in the U18/19 Champions League, goalkeeper Lauren Boafo put in one of the most impressive outings of the championship week.

With her Eclipse Select knotted with PDA Blue at 1-1 through 90 minutes, the contest went straight to penalty kicks.

PDA Blue’s first attempt went over the net. On their second attempt, Boafo dove right, making a stop and giving her team a 2-0 lead.

After both teams made their third shot, it was time once again for Boafo to play hero.

PDA moved up to the spot, desperate for a goal. Boafo was locked in. The kick came and Boafo dove left, saving the shot.

On Eclipse’s turn, they made no doubt, scoring once again and pushing the team’s ticket to the National Championship.

“It felt so good to get the win today,” said Boafo. “All our hard work, it’s finally paying off. It was a tough game, but we got it at the end.” 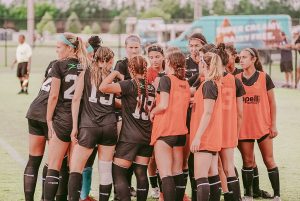 Eclipse started the game extremely strong, with Ella Richards scoring in the first minute of the match. Standing inside the box, she ripped a shot into the top left corner, giving the PDA keeper no chance on a save.

“We talked about being ready to go from the opening whistle,” said Head Coach Marc McElligott. “To score that early in a big game like that, it gives you a lot of confidence.”

That score held until midway through the second, where PDA was finally able to even the score. Lauren Wrigley was standing at the back post, and when a service came in from the left side of the pitch, she pounced and was able to convert.

Boafo was forced to make a flurry of saves as the contest wound down, denying PDA chances to earn the go-ahead goal.

Any chance PDA had to earn a victory was then firmly closed shut when the game went into PKs.

“We were very confident when we got to penalty kicks,” McElligott said. “Lauren’s a tremendous keeper, we’ve gone through the routines with the shooters all the time, so we felt very, very comfortable.”

With the win, Eclipse’s U18/19 side booked its first shot at a championship since the team was in the U14 age group. This time though, they want to bring home the trophy.

“It means the world to have a chance at a championship,” Boafo said. “We’ve been after it for so long, and now we’re in the Final. All this time, we’re finally back there. It’s going to be our last game together as a team too, so it’s going to be memorable one way or another.”

“We’ve been with this group for the past five, six years, so to be back in the Final, it feel’s tremendous,” McElligott said. “It’s been a long journey but they’ve earned it. Getting a win would be finally putting a cap on all the good things they’ve done over the years.”

Internationals SC was on the ropes.

After Jordan Fusco scored a goal in the second minute in the second U18/19 Champions League semifinal, Charlotte SA roared back in the second half with two goals in a three-minute span. Christian Brathwaite rocketed home a shot after a service from a corner kick bounced around in the box and then Alondra Nieves Melchor followed it up by splitting the Internationals defense and scored off her own rebound in the 54th minute.

Charlotte then appeared to make it a 3-1 game late in the half, but a player was offside.

Internationals had their opening.

In the 88th minute, Internationals earned a free kick a long way from the net. The team put a shot on net and near the goal line, Erika Zschuppe leapt into the air and connected with her head, knotting the game at 2-2.

“It doesn’t matter when opportunity comes,” said Head Coach Zdravko Popovic. “The earlier the better, the more often the better but you have to be prepared and have to anticipate. You have to focus and execute. And we did.”

Just like its predecessors, this game was forced to go to PKs. 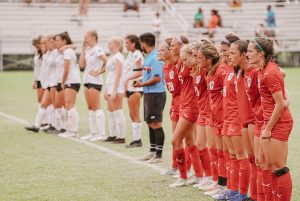 In penalties, Internationals left no doubt, scoring on all five attempts while also making a save on Charlotte’s first shot, advancing to the championship game.

“To get the win, it was awesome,” said Head Coach Zdravko Popovic. “The PKs, I think it aged me a couple years, but I like getting old. Today’s win was like we baked a cake, which is obviously sweet. Putting icing on it, we need a national championship. It wouldn’t be any better than that.”

With the possibility of a championship on the horizon, it’s not hard for ECNL Director Keri Sarver to think about what a win would mean for Internationals SC.

“We’re a pretty small club, so this result shows the commitment of our players and our parents,” Sarver said. “The support of our entire organization is behind this team. So a win for this team is a win for our entire club and to win on this stage in the best league in the country, it’s why we do what we do. It’s why the players put in so much work and why the families do so much to support the organization. So it would mean the world for us to win this event.”

Saturday afternoon marked the first trophy handed out at the ECNL Girls National Playoffs. On Field 3, So Cal Blues defeated Sting Dallas Royal in the U18/19 Composite Division by a score of 2-0 to earn the title.

In the eight-team bracket, the top-seeded So Cal Blues opened its championship run with a decisive victory against FC Bucks on June 30, then booked its ticket in the championship match with a 3-1 win against Solar SC.

Then on Saturday, So Cal Blues scored once in the first and second half while completely keeping its opponents off the board, notching a win in the team’s final ECNL game ever.

Coaches Greg Baker and Tad Bobak were rightfully proud of their team, and pointed that moments like these are ones the team will remember forever and will help them along their path in life.

“We talk about life skills throughout all the years they play at our club,” Bobak said. “Soccer is life-encapsulating. All the things you encounter and what you learn throughout those years in soccer, helps you climb that mountain that is life. They finally achieved that top of the mountain. They can now reflect on these moments and use them to accomplish the tougher mountains they create for themselves later in life.”