Audrey Glover had the ball at her feet just outside the 18-yard box. In front of her was a wall of PDA Blue players.

The ref blew her whistle. Glover ran forward and swung her left foot, making great contact with the ball.

Her shot rises over the wall. The PDA keeper jumps with her arms outstretched.

The ball finds the back of the net. San Juan takes a 2-1 lead.

The U13s of @SanJuanSC with the HUGE strike in this win-or-go-home match vs @PDAGirlsSoccer to take the lead late and take home that dub!#ECNLplayoffs pic.twitter.com/p9HtrJEbkX

In the U13 Champions League matchup between the No. 2 PDA Blue and the No. 15 San Juan SC, San Juan overcame a 1-0 deficit at halftime to earn a 2-1 victory against one of the best clubs in the age group, moving on to the Quarterfinals in the process.

“It feels amazing to get the win, but it feels even more amazing for the girls,” said Head Coach JJ Wozniak. “They balled out today; they played so well. They were committed, they competed and I’m so happy for them. It was two really high-level teams who just got after it for 70-plus minutes. We were just fortunate to be on the plus-side of it today. ” 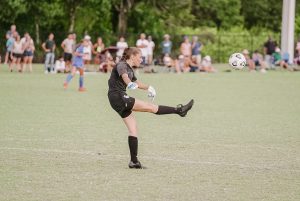 It was PDA who took a 1-0 lead in the first half and despite the deficit, there was never a shred of doubt from San Juan the club would equalize.

“We’ve been in these situations before,” Wozniak said. “We’ve been down a goal before. Obviously, not the ideal situation at a national championship event, but the girls all told themselves, ‘We’ve been here before. We’ve got this. Let’s get after it in the second half.’ And ultimately, I think that passion, energy, fire got us through.”

Early in the second half though, PDA appeared it was going to pull away. The New Jersey-based team earned a free kick at the top of the box, in nearly the exact same spot as Glover’s later in the contest. However, soccer is a game where the smallest of margins can make the biggest of differences, and it was proven as such when PDA’s shot went wide.

“I thought we started the second half very well and then they got that free-kick, in a very similar spot as ours,” Wozniak said. “Fortunately for us, they didn’t put it on frame.” 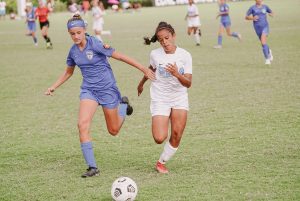 Using that momentum, San Juan continued to press, getting shots on net and getting chances to find a winner, all while also weathering the PDA attack. And then it was at the top of the box, with just five minutes left, where the team was able to break through.

Glover, with the game and her team’s season on her shoulders, buried it.

“The kids on our team, they spend time and work on free kicks, no different than a pro player,” Wozniak said. “When you spend the time on it and work on it, kids like Audrey are going to step up and put it in the back of the net.”

San Juan earned the win, and a huge one at that. They pulled off one of the largest upsets at the ECNL National Playoffs and earned the chance to continue its quest for an ECNL Cup.

But that’s not what Wozniak discussed with them following the game. It was that moments like these will remain with them forever and will help shape the rest of their ECNL careers. 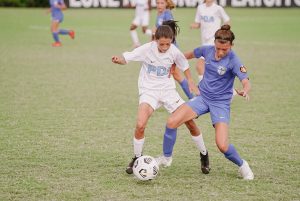 “At the end of the day, they’re 12, 13 years old,” Wozniak said. “They’re going to have more of these opportunities, but this first experience at this age is what they needed. That experience is helping them. Yeah we want to win, we want to advance, we want to hold a Cup at the end, but the biggest thing for me is relaying to them that they still have to enjoy the moment. They have to have fun and make it memorable. When they’re 18 and looking back at their ECNL National Playoffs t-shirt, they’ll remember today and this game.”