The ECNL Playoffs are made for big moments. It’s where players rise to the occasion and step up to give their team the victory. It’s where memories are made and trophies are lifted.

On Thursday evening, there might not have been a bigger and better performance than that of Solai Washington on the Concorde Fire Platinum U17.

Facing off against Utah Avalanche in the Champions League, Washington played a major role in guiding her team to a convincing victory.

After falling behind 1-0, Washington got Concorde on the board in the 14th minute with a strike from the right side of the pitch, pulling the teams even at 1-1. 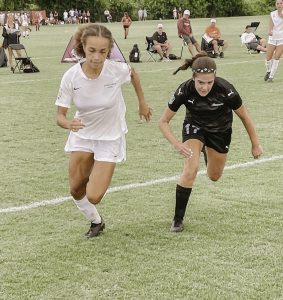 She added her second of the game in the 29th minute, putting Concorde ahead 3-2 after her teammate Henley Tippins scored just minutes before. Washington then capped off an impressive half with her third tally of the contest, recording a hat-trick in the 38th minute. Following halftime and a much-needed rest, Washington subbed into the game and added a fourth goal in the 75th minute.

“We had been struggling to finish, so to be able to put some into the back of the net, it feels great,” Washington said. “It was a great game today and I’m excited to keep pushing.”

Four goals in a Champions League matchup is already impressive. But what truly makes Washington’s special is that she’s doing it while playing a year up.

“Her performance today, it was a long time coming,” said Head Coach Garvin Quamina. “She’s accustomed to scoring a ton of goals and she just turned it on today. She’s a joy to be around. A great kid.”

Even with the performance, neither Washington nor Quamina are getting too high following the win. Both know what’s at stake and what the ultimate goal is: an ECNL National Championship.

“We just need to stick to our game and play to our strengths,” Washington said. “Just focusing on what we need to do on the pitch and not taking it for granted and keep working toward a championship.”

“We need to win a championship, everything else doesn’t matter,” Quamina added. “I’m happy for Solai and the ladies today and hopefully we can continue this performance but not get too high either. Just getting ready for the next games, because they’re all must-wins.”