Ice In Her Veins

Grace Klosinski was silent, staring down at the pitch as she walked to the goal line. She knew the weight of the moment. She knew what was on the line. As she got to her spot, she looked up and stared down the shooter. The goalkeeper dove right, extending her arm and kept the ball out of the net.

Her stop gave LAFC Slammers a two-shot lead after two rounds of PKs in the team’s U18/19 Champions League matchup against Real Colorado National. After two more rounds, Klosinski and Slammers celebrated a 0-0 (4-2) victory, moving on in the bracket.

“I’m not surprised this game went to PKs, both teams are phenomenal,” said LAFC Slammers Head Coach Ziad Khoury. “Grace is fantastic. We felt very comfortable with her in net for penalties. She lives for that moment and thrives in it.”

Klosinski knew the weight of the moment. She had experienced it three years ago.

In 2018, LAFC Slammers were in the U16 National Championship game in Richmond. Neither side scored in regulation nor in extra time, sending the game to PKs. With a trophy on the line, Klosinski backstopped her team to a national title.

“I got flashbacks,” Klosinski said. “Every penalty-kick shootout is nerve-wracking, but you just have to calm those nerves and channel them into focus. To clutch it up at the end, it was an amazing feeling.”

That game and that feeling were in Klosinski’s mind when she made her way to the goal line for the penalty kicks. 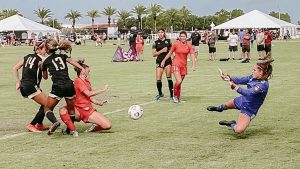 Klosinksi didn’t just shine in the tiebreaker though; she was a major part of LAFC Slammers’ win throughout the contest. While she wasn’t tested much in the first half, she stood tall, making every stop. And when Real Colorado National pushed early in the second half, Klosinski made sure she kept her side in the game. Multiple diving saves kept Real Colorado National off the scoreboard, giving her teammates enough juice to push through and take back control before the final whistle.

With the win, the University of Arizona commit can continue her ECNL career and journey for a title for at least another game.

“Coming out this year, it feels great to be back and compete for a national championship once again,” Klosinski said. “I’m excited for Arizona but I didn’t want this to end just yet.”

Soccer is more than just one person. It takes all 11 to get a win. St. Louis Scott Gallagher – Navy proved that in their U18/19 contest against So Cal Blues.

SLSG – Navy and So Cal Blues were evenly matched throughout the competition, playing to a 1-1 draw in regulation, forcing the contest to PKs. It was a spot Head Coach Ralph Richards knew his team would be comfortable in.

“We knew that with this format, any game goes immediately to PKs,” Richards said. “So for the last few weeks, whenever we played a friendly or had a training session, we set up a PK shootout at the end. We wanted to get PKs in, and get comfortable in that scenario.”

Everything from the weeks leading up to the ECNL Playoffs allowed for one of soccer’s rarest feats to appear in this contest.

Each team took their customary five attempts, and after the fifth round, the game was still tied, pushing it into the sixth round, triggering sudden death.

And then the seventh.

And it was in this round, with every single player on the field having taken an attempt, that SLSG – Navy found victory.

“They were all ready to go,” Richards said. “I coached them up but then I had to go to the sidelines, and I was OK with that. It was their moment. It was their time to step into the light and do it. They had practiced and were ready. And I was so impressed with them. They went up there and did the business.”

The 16th-seeded SLSG – Navy played a complete game, and used all 11 of its players to knock off the top-seeded So Cal Blues in the opening round. And they were the only U18/19 underdog to earn a victory.