During one’s lifetime, one hopes to leave some impact on the world, to make a difference for the people they meet and the community they live in.

At just 13 years old, Ella Bard has already made a significant impact in her community of Wadsworth, Ohio. A member of the Internationals Soccer Club ECNL U14 team, Ella was named the 2021 SheBelieves Hero™ for her efforts in recycling and eco-friendly campaigns within her community, promoting a healthy body and healthy mind, and for being a leader in every aspect of her life.

The SheBelieves Hero, created by US Soccer and the U.S. Women’s National Team, was created to inspire and encourage girls and women of all ages to accomplish their goals and dreams, athletic or otherwise. The campaign was originally launched in the run-up to the 2015 FIFA Women’s World Cup, but has since evolved into a special bond between the team and its fans, taking its powerful message of empowerment and that of believing in yourself into communities across the nation.

“Ella’s entry was not only motivating and inspiring, but also she is making a huge impact in her community on and off the field,” said former U.S. Women’s National Team standout Lindsay Tarpley, a member of the SheBelieves Hero Selection Committee. “She’s involved in several projects and initiatives that have the potential to be life-changing events. Her vision, work ethic and commitment are admirable and inspiring.”

The qualities mentioned by Tarpley are also not unseen by Internationals’ ECNL Director Keri Sarver. Sarver said Ella’s drive, work ethic and leadership are perfect examples of what the program hopes to instill in its athletes and her success can be replicated by every player in the club.

“Ella is an inspiration to all of us at Internationals Soccer. She dedicates herself to helping others and making a positive impact on our planet,” Sarver said. “At such a young age, she is leading initiatives that will be felt for many generations to come. On the field, she is one of our most consistent and impactful performers for our U14 ECNL team. She leads by example day in and day out and exemplifies our club values of passion, love and respect towards the game and towards others. Ella is a role model for our younger and older generations alike.” 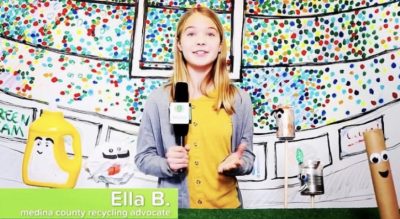 Ella became involved in eco-friendly efforts when she was 11. The Medina County Recycling Center, her local recycling plant, held open auditions to be a spokesperson and to raise awareness for the center and its efforts. Seeing an opportunity to better her world, Ella submitted a video and she was selected to be the representative. She now makes public service announcements and social media videos to highlight the benefits and ease of recycling.

“I wanted to get involved with the Medina County Recycling Center because we have to raise awareness to help our environment,” Ella said. “We can’t let climate change get in our way. We have to do things to better our environment. We live in such a pretty place and we need to keep it that way.”

Along with being the face of the Medina County Recycling Center, Ella and her mother lead community litter cleanup efforts. During the spring, they try to hold a weekly event to help clean up litter after the long winter months, and then will periodically hold events through the summer and fall before it starts snowing again.

“I kept wanting to find different ways to help the environment and my community, and to get other people involved,” Ella said.

Ella posted notices for litter cleanups and, as an effort to get more kids involved in the initiative, started to distribute sustainable goods as giveaways. Last year, Ella’s leadership led to picking up hundreds of pounds of litter throughout her community.

Ella is not just dedicated to improving her community though, as she is also passionate about personal health and well-being. The same year she started her initiatives with the Medina County Recycling Center, Ella also became a certified yoga instructor. 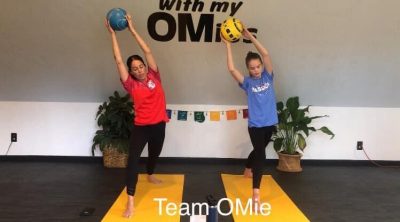 “My mom is certified and she was hosting and teaching yoga to kids and adults,” Ella said. “I was going to her classes and doing the poses along with them, and I just fell in love with it. It just felt so powerful. I really wanted to teach myself because it was something I was interested in. And after taking a few classes, I got instructed and became certified.”

With her certification in hand, Ella was ready to lead her own classes. Ella partnered with one of her Internationals teammates and together, the two hosted a yoga class at a local television studio once a month. During the pandemic, Ella wasn’t able to go to the television studio, so instead, she decided to live-stream classes. She even led a yoga session for her ECNL club and created a gameday meditation presentation for her teammates.

In addition to her eco-friendly lifestyle and being a yoga instructor, Ella is also an honor student at school and an elite soccer player. She has a lot on her plate, but it’s nothing she can’t handle.

“I couldn’t do it without my mom, my whole team and everyone else who supports me,” Ella said. “You just have to find a good time balance and really, be present in the moment to focus on what you’re doing then. Just stay focused on what needs to be done.”

Ella was nominated for the SheBelieves Hero in January of this year, and at the beginning of March, it was announced that she was one of five finalists. Throughout March, the SheBelieves Hero held a social voting campaign, where thousands of fans could select who they thought was most deserving of the award, and those totals were then factored into deciding the winner. On March 26, with her teammates by her side, Ella received word that she was named the 2021 SheBelieves Hero.

“My team was so supportive and I know that they all care so much, so to celebrate winning with them, I think it made everyone even happier,” Ella said. “It almost feels like they got to win too because we were all together and they got to experience that with me.”

By being named the SheBelieves Hero, Ella will receive complimentary travel, tickets and an exclusive VIP experience at a future USWNT match. For someone who has been playing soccer since the age of four and has idolized the USWNT all her life, it’s made a once-in-a-lifetime experience even more special.

“I’ve looked up to them for so many years,” Ella said. “I’ve always wanted to meet them. This has been a dream come true. Meeting them, I think it’ll just inspire me so much more, to be more passionate about the game and it will just keep pushing me harder and harder to get better.”

And much like her USWNT heroes, Ella can now lead by example for others who want to enact positive change within their community.

“It’s really inspiring to think that people could be looking up to me and could be learning from me,” Ella said. “I just want to tell them that effort is really what matters. Whether it’s soccer or my work in the community, I always come in with the mindset that I’m going to work the hardest and I’m going to give it my all no matter what. And I just want others to do the same.”