February 12, 2019 (RICHMOND, VA) – As we roll through the Girls ECNL’s tenth season, the Amazing Young Women movement continues to celebrate female role models and share their story with the next generation of leaders. This week we are honored to feature Kaylan Marckese as the ECNL Amazing Young Women Spotlight of the Week.

Kaylan started 2019 by being selected by Sky Blue FC in the National Women’s Soccer League (NWSL) draft that took place in January. “I am excited for the challenge of playing at the next level'” said Marckese. “From club to college is a pretty big jump where you hit a learning curve for level of play, but the gap from college to the NWSL is so much bigger. There is more experience, knowledge and aggressiveness. I am excited to continue to grow and develop.” 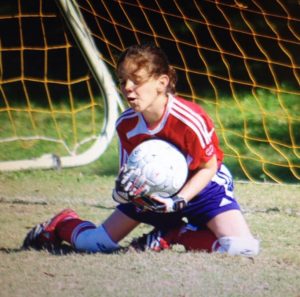 Marckese grew up in St. Petersburg, Florida and began her soccer journey as a field player. When provided the opportunity to play goalkeeper, Marckese fell in love with the position and the opportunity it provided to see the whole field and be responsible for directing the defense.

While Marckese never had the opportunity to play in the ECNL, her youth team played an integral role in Tampa Bay United making its mark in the youth game and ultimately earning ECNL membership, which occurred just one year after she became a Gator at The University of Florida (UF).  “I was there from the start of my youth soccer career and had some of the best coaches in the club.” ECNL Director Adrian Bush added, “Kaylan and her teammates elevated the level of the play within the club and helped set the standard for all current and future teams.” 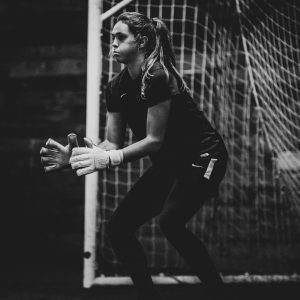 Marckese originally envisioned herself getting out of Florida to continue her education and play at the collegiate level. However, after visiting UF, she quickly changed her mind. “I was sitting on the practice field and I could see myself competing at that complex and in that environment,” she said about her visit to UF.  While finding a school that would challenge her athletically was crucial, she also wanted one that challenged her off the field as well. She knows she won’t be able to play the beautiful game forever, so it was important for her to have a coaching staff who truly cared about developing their athletes as both players and people.

Marckese made quite the impact her freshman year, playing the entirety of 15 matches, earning five shutouts. 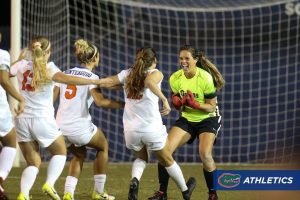 “The seniors had my back,”remembers Marckese about her freshman year, specifically recalling an assist she earned taking a quick free kick out of her box.  Immediately after the goal was scored, a junior on the team ran all the way back to goal to give her a hug and celebrate with her. “That was an awesome moment,” describes Marckese. “Typically you celebrate goals by yourself as a goalkeeper, so as a freshman , this was an unforgettable moment.”

Marckese went on to play 4 years of soccer for the Florida Gators, competing in 74 matches, earning 29 solo shutouts, and winning 48 games. She was named to the SEC All-Tournament Team her junior and senior year. Just a few months after her final season at UF, Marckese was picked up by Sky Blue FC. “I was shocked and nervous, but also hopeful and excited at the same time. I had an immediate urge to start training and prove to Sky Blue FC that they made a good decision.”

Adrian Bush spoke highly of Marckese’s training mentality and drive to continue to improve, and how proud he is to see the player she has become already; “Kaylan had a sense of professionalism at a young age, which is why she is pro right now.”

Marckese is excited for the challenge of playing professionally. She hopes that her story will help inspire other kids to chase their dreams. We wish Kaylan Marckese luck in her first season as a professional women’s soccer player, and look forward to following her continued success on the pitch.