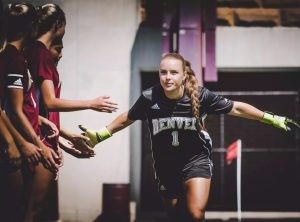 RICHMOND, VA (September 18, 2018) – As the ECNL enters its tenth season, the Amazing Young Women movement continues to be an integral part of the league. The ECNL is dedicated to sharing the stories of the amazing young women that make the league what it is today.

We are excited to announce Brittany Wilson as the ECNL Amazing Young Woman Spotlight of the Week. Wilson is a current junior at the University of Denver and a Real Colorado ECNL Alum who started her own podcast, Before the Lights. She was inspired to begin ‘Before the Lights’ as a way to share her story and connect with other athletes and high-level performers to discuss how sport can have a positive impact on life.

Wilson is a native of Littleton, Colorado where she grew up and began playing soccer at the age of five. Soccer has been a constant in her life, helping her through a difficult childhood.

“Growing up I didn’t realize what I was going through wasn’t normal,” Wilson said about her troubled childhood. “I focused a lot on soccer, and it became my outlet. I don’t know where I would be without it.” 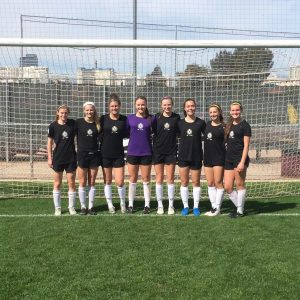 While navigating a difficult home life, Wilson excelled on the pitch as the goalkeeper for the Real Colorado ECNL 2006 team. She received looks from several collegiate programs, committing to the University of Denver her freshman year and earning several invites to US Youth National Team camps.

As Wilson progressed in her craft, her family issues grew worse. She kept things in, compartmentalizing her family struggles until she realized she could use her own experiences to raise awareness and help others.  Every person goes through difficult situations at some point in their life, and those that are brave enough to talk about it can help others push through.

Wilson wanted to speak up and make a difference, so she put her thoughts to action.  She discovered podcasts and immediately was drawn to the medium as a platform to share her story and connect with others. Wilson was determined to launch her podcast, and immersed herself in podcast tutorials and trial runs with local athletes.

Through social media marketing, she gained a following and began growing her contact list to share stories. Content focused stories on success, overcoming adversity and forging new paths made it easy to relate to a broad audience and have even attracted guests for podcasts.

So far, Wilson has released twelve episodes and is not slowing down. In her first episode, she discusses her own obstacles in a vulnerable and inspiring way, describing the impact her parents’ relationship had on her and her sister. After several supporting friends and fans reached out to share their own story, Wilson was empowered to continue searching for people and stories to share. Some of the guests she has hosted include: fellow ECNL Alum Jordan Dibiasi, former National Football League (NFL) Player Trent Shelton, and CrossFit athlete Marcus Filly.

Each guest brings their own perspective on overcoming, pushing boundaries and believing in a positive outcome. Topics on the ‘Before the Lights’ podcast range from dealing with mental health, race in sports, nutrition and how your mentality can help you change your game. Wilson hopes to connect with other athletes and beyond to keep the conversation going.

“I want to share as many stories as I can. I love talking to high-level athletes and exploring the path that got them to where they are,” Wilson said about her podcast and what she hopes to achieve. “I want to leave a lasting impression, one person at a time, and have fun with the process. It is ok to be vulnerable and let down your guard.  That is where you truly learn about yourself and what you are capable of accomplishing.”

We wish Brittany Wilson the best of luck with her soccer career and her podcast. Thank you for being an Amazing Young Woman and using your obstacles as a stepping stone and a method to positively impact others.

CLICK HERE to tune in to ‘Before the Lights’ and listen to all podcasts.

26 ECNL Alums Battle for a Spot in the NWSL Finals