RICHMOND, VA (July 31, 2018) – The Girls Elite Clubs National League (Girls ECNL) has announced Ali Krieger as the July S’Hero of the Month award recipient for individual and community leadership. As the S’Hero of the Month, Krieger embodies the virtues that the Amazing Young WomenTM movement represents. Her determination, positive spirit and hard work to return to the highest level after several devastating injuries, as well as her dedication to giving back both on and off the pitch is inspirational. 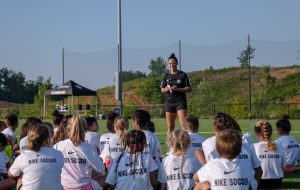 Ali Krieger has hit the highest highs on the pitch and some of the lowest lows, but throughout it all she has remained optimistic, determined and committed to the game.  Having had a decorated soccer career spanning well over a decade, she has now turned her sights on giving back, especially to her hometown in Northern Virginia.

Krieger was born and raised in Northern Virginia, playing for her father, Coach Ken Krieger, throughout her youth career with the Prince William Sparklers club team. She credits her father for shaping her into the player she is today. As a young player she stood out on the pitch, excelling both technically and tactically and making her a force to be reckoned with. Krieger was one of the smallest players on the field, but what she lacked in size she made up for with grit, determination and her overall attitude that anything was possible.

This outlook on life was infectious, and one that opened so many doors for Krieger.  Some she never could have imagined.  The Sparklers went on to earn seven state championships; numerous first place finishes in major showcases across the country, and a bond that is tough to by these days.

Krieger instantly became a leader on her Forest Park High School team, laying the foundation for a winning culture.  She went on to set records and make history for the Bruins, earning the Gatorade Girls’ Soccer Player of the Year award for the state of Virginia. 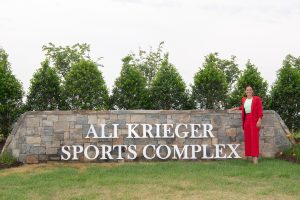 Her home has and always will be Northern Virginia, with hometown supporters proud to claim Krieger as a local celebrity and success story.  She played for the Washington Spirit, not too far from her childhood home, and most recently traveled back up to Dumfries for the groundbreaking of the Ali Krieger Sports Complex. This complex will be run and maintained by the county in her name, and will help to give back and provide opportunities to local youth.

“I’m truly honored and excited to see this complex become a destination for young aspiring athletes, to help make future dreams come true for young athletes playing the sports they love,” Krieger said about the honor of having the complex named for her.

Krieger began making a name for herself at the next level at Penn State University. The Nittany Lions won four Big Ten championships, advancing to the NCAA tournament each year, with Krieger recognized as an All-American in her final two seasons. While finding success on the pitch, she also faced her first major injury when she was sidelined with a broken her leg a week before the post season her junior year.

“My competitiveness, mentality, and determination to want to continue to challenge myself and get better every single day is what kept me fighting to return,” Krieger said about her recovery.

When she made her comeback, her on the field performance did not waiver. In fact, her leadership and team-first mentality led her to challenge herself even further by stepping up to play in a new position as a defender in her final collegiate season. Krieger had no idea what door this would open.

Following her college career, Krieger went on to play in Germany for FFC Frankfurt to play at the highest possible competitive level, with her sights set on earning a spot on the United States Women’s National Team (USWNT). In 2008, her dream came true as she made her first appearance for the red, white and blue in the Four Nations Cup held in China. In the same year, Women’s Professional Soccer (WPS) was formed and she was allocated to her hometown team, the Washington Freedom.

Krieger enjoyed her time in Germany, fully immersing herself in the culture, and becoming fluent in the native language. She was allocated to the Washington Freedom, but continued her contract in Germany until a foot injury left her sidelined. She joined the Freedom in 2009 as she recovered, with the same mentality from her college injury. Krieger was determined to get healthy and represent her country as the FIFA Women’s World Cup approached. 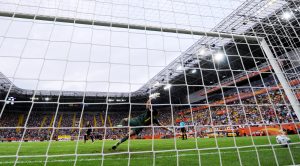 Alex Krieger of team USA scores the final penalty against Andreia of team Brazil during the FIFA Women’s World Cup at the FIFA Stadium in Dresden, Germany on July 10th, 2011.

In 2011, this goal became a reality when she was named to the FIFA Women’s World Cup team. This was particularly special for Krieger as the tournament was held in Germany, where Krieger called home for five years. She played every minute of the tournament, notching the winning penalty kick to send them to the semi-finals. The USWNT brought home the silver, leaving Krieger hungry for more, and shifting her sights to the Olympics the following year.

In the 2012 CONCACAF Olympic Qualifying tournament, she suffered a devastating injury when she tore ACL, MCL and meniscus in her right knee. The timing did not fit into her plan, and therefore was not able to make a full recovery before the naming of the 2012 USWNT Olympic squad.

Once she fully returned from her knee injury, the newly formed National Women’s Soccer League (NWSL) was in full swing. She played for the Washington Spirit (formerly the Washington Freedom) for four seasons before beginning a new adventure with the Orlando Pride.

Krieger recently played in her 100th game in the NWSL, cementing not only her legacy in the league, but the strength and success of women’s professional soccer in this country.

“The NWSL has given professional players a platform to continue to do what we love, which is to compete and play at the highest level. It provides young girls, women, and all supporters great role models to look up to and share a common passion,” Krieger said about the league. “It continues to grow every year, and has become more dominant, which is a sign of success. I can only hope it will continue, and bring people together to positively affect our sport for years to come!” 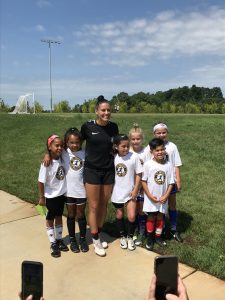 Her experiences on and off the pitch inspired Krieger to give back to the next generation of footballers. From this, she launched a brand-new initiative, Ali Krieger Football Camp, which kicked off this past weekend, July 28th, in her hometown. The objective is two-fold: to help develop young players at the top level, and in addition, provide an opportunity for adults who want to enjoy the beautiful game.

“My motivation is simply helping young athletes understand the key components for success both on and off the field. I want to give back to the community that has helped me become the woman and footballer I am today, and share what I’ve learned through my career,” Krieger said about her new venture to give back. “I feel as though I can help teach youth and adult athletes what it takes to play at the highest levels. If I can do my part to help change the way young athletes think and play football in a positive way, then I will have reached my goal.”

“Every child deserves the chance to walk, run and even play soccer! I want to use my platform for organizations that I truly believe in, and being an ambassador for Miraclefeet is an incredible feeling,” Krieger said about her involvement with the organization.

Krieger’s impact and success on and off the pitch is a testament to her determination, positivity and work ethic. Through hardships and triumphs, Krieger’s dedication to the game has never stammered, and the rewards are endless. She plans to continue to build her brand, and elevate others along the way through her camps and other philanthropic pursuits.

Ali, thank you for taking us behind the scenes and for continuing to share your love of the beautiful game. You are an Amazing Young Woman, and today we celebrate the impact you have made on the soccer community.