RICHMOND, VA (February 8, 2018) – The Girls ECNL caught up with FC Boston Scorpions, a current member of the Northeast Conference, to learn more about the commitment the club has to the community, and to share their most recent service story.  The Girls ECNL celebrates the Amazing Young Women that help make it the top female youth development league in the country, and the impact players have both on and off the field. This past holiday season FC Boston players and staff came together to give back to Bostonians in need, making a big impact.

On December 23, 2017, the member club held the First Annual Scorpion Soccer Holiday Fundraiser, a Soccerthon to collect donations for both the Boston Children’s Hospital and the Scorpion Scholarship Fund. With over 150 players attending the event, FC Boston was able to generate over $22,000 in donations. They surpassed the initial $15,000 goal set for the first year with two weeks remaining in the campaign. The dedication and time commitment from the Scorpion families and staff made this possible.

“Our First Annual Holiday Fundraiser was an amazing success for a number of reasons. Mainly because of the overwhelming generosity, time and effort given from our players, families and staff! We came together as a soccer family to celebrate the holiday season and give back to those going through a difficult time,” said Nick Rugnetta, Girls ECNL Director for FC Boston Scorpions. “We are beyond proud of our Scorpion soccer family, and we cannot wait to start planning next year’s fundraiser to continue the cause and give back.  The bar has been set very high, but we are ready for the challenge.  Our club believes that soccer is more than the game itself, and the ECNL provides a platform to raise awareness and share stories. The ECNL is More Than a League.”

Members throughout the club were responsible for raising donations for the event through a donation website, which tracked donations and recognized top fundraisers. They raised funds as individuals and in teams as they set out to collect donations from friends, family and the local community. Once monetary donation collections were made, they celebrated with a one day Soccerthon.

Three different ECNL age groups attended the Soccerthon throughout the day, which featured soccer games, music and Holiday festivities. The Scorpion staff set up small-sided 6v6 and 9v9 games, while also spearheading a Scorpions Skills Challenge where players were challenged in several ways including an Accuracy Contest, Mini Ball Juggling Contest and a Speed Shot Contest.

The fundraiser made a lasting impression on the ECNL players who attended the event. See below for testimonials from four of the players that gave to the cause:

“The fundraiser filled me with joy, knowing that we were all a part of helping kids less fortunate than us. Some of my favorite memories of the day were the skills events, but everyone was having a great time just playing the game they love.” – Maddie Ledbury, member of the FC Boston Scorpions ECNL U15 team

“I really enjoyed the event and playing for important causes alongside my teammates. Playing with others made me appreciate the game and my ability to play even more. It was great knowing that by participating in the fundraiser, I was able to help those in need at the Boston Children’s Hospital, and give another player the opportunity to play the game. I had a great time playing at the event and look forward to the next one!” – Ava Nace, member of the FC Boston Scorpions ECNL U15 team

“The winter fundraiser gave me the chance to give back to a great cause, and play soccer while raising awareness. This is a win-win in my book. The ECNL provides tough competition and high expectations, so it was great to leave the pressure we thrive on at the door and have fun for something much bigger than the game. I know someone my age currently getting treated at Boston Children’s Hospital, so raising money for a cause that has affected my family made it even more rewarding and I cannot wait to raise the bar the next time around. – Kelsey Moody, member of the FC Boston Scorpions ECNL U17 team

“The Scorpions winter fundraiser for Boston Children’s Hospital was an invaluable experience. Giving back to the hospital that was instrumental in a fellow club mate’s recovery from cancer was incredibly rewarding. The fundraiser was also extremely fun! It was great to see everyone playing together for a common cause in their spirited holiday sweaters (Shelley’s light-up sweater was definitely my favorite). I hope FC Boston holds another fundraiser or service project sometime in the near future!” – Maia Madison, member of the FC Boston Scorpions ECNL U17 team

Thank you to the FC Boston Scorpions organization for embodying the club values that the ECNL cherishes, and thank you to the Amazing Young Women and their families who dedicated their time and energy to give back to the community during the holiday season. 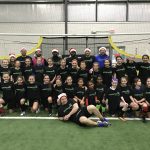 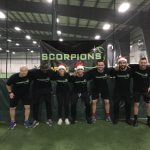 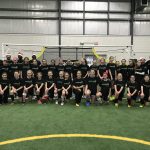 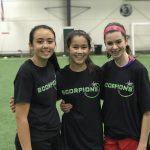 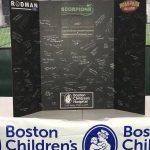 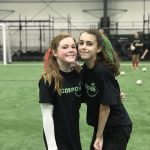 About Girls Elite Clubs National League: The Girls Elite Clubs National League (Girls ECNL) was founded in 2009 to enhance the developmental experience of female youth soccer players in the United States through: (i) improving the competitive environment through creation of a true national competitive league; (ii) improving the process for identifying elite female soccer players through a systematic scouting and identification program based on national competitions; and (iii) improving the daily training environment at top female youth soccer clubs through developing best practices and training and organizational guidelines for its member clubs. The Girls ECNL is sanctioned by US Club Soccer and is sponsored by Nike Soccer.