RICHMOND, VA (January 23, 2018) – The Elite Clubs National League (ECNL) today announced Andi Sullivan as the January S’Hero of the Month award recipient for individual and community leadership. As the S’Hero of the Month, Sullivan embodies the virtues that the Amazing Young WomenTM movement represents. Her determination, positive spirit and hard work to not only return to the pitch, but continue her trajectory towards professional soccer after a devastating injury is inspirational. 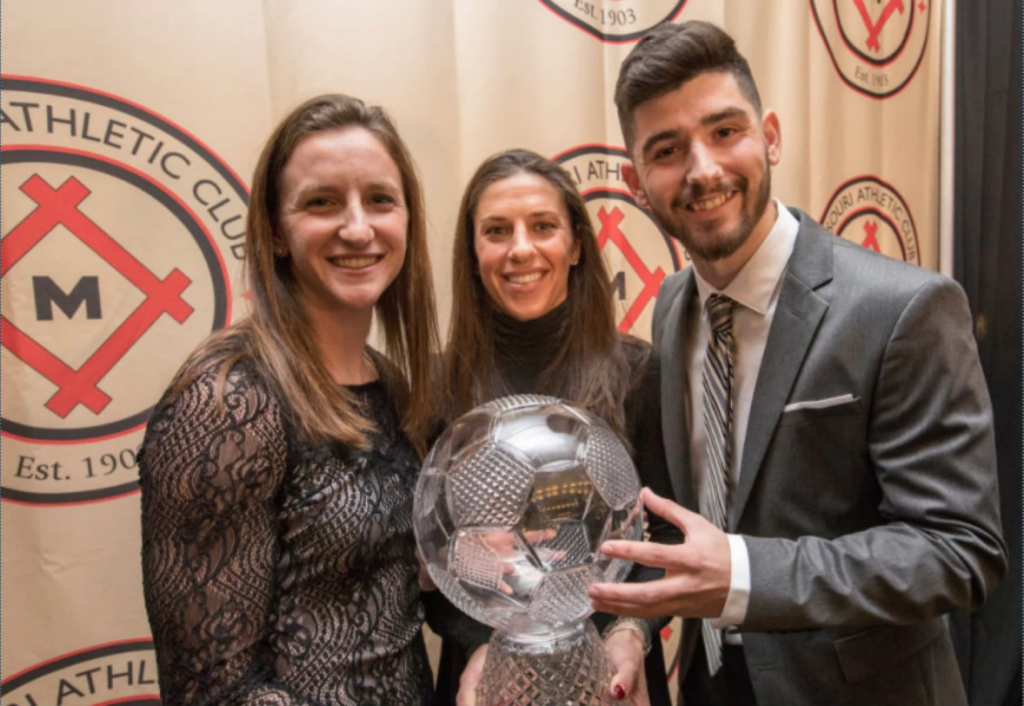 At the peak of her career, Sullivan’s fairytale came crumbling down with an awkward landing two years ago. She was just weeks removed from her debut for the U.S. Women’s National Team (USWNT) and heading toward the Final Four with Stanford.

She instantly knew that she had suffered a significant injury, and was in disbelief that it could be happening to her. She had torn her Anterior Cruciate Ligament (ACL), facing the first serious injury of her career. Fast forward to the present day; Sullivan is fresh off a national championship and Hermann Trophy win. She is back in the USWNT rotation, the number one overall 2018 National Women’s Soccer League (NWSL) draft pick and looking at a bright future in soccer.

Sullivan is a product of Northern Virginia, following in her three older siblings’ footsteps as a soccer player. Throughout her development, she played with Bethesda Soccer Club, current ECNL Member Club, and part of the inaugural ECNL season. In her final ECNL season, she joined McLean Youth Soccer Academy after the majority of her Bethesda SC teammates transitioned to college.

As a standout in Northern Virginia, she enjoyed the competition of the ECNL and the exposure the next level of soccer. Through her coaches and the scouting opportunities provided through the league, Sullivan weighed several great college options before committing to Stanford University.

“I didn’t feel like I could go wrong with my college decision. Stanford’s reputation won me over. I wanted to be in that type of environment, where everyone’s inspiring to do something and works hard on and off the field,” Sullivan said about her decision to continue her academic and soccer career. “This was the best place for me and would help me grow the most as a person. I know I made the right decision.”

At Stanford, she immediately found her rhythm on the pitch, earning Pac-12 Freshman of the Year and National Freshman of the Year honors by Soccer America and TopDrawerSoccer. She was also making her way through the USYNT ranks where she captained and started each game for the United States in the 2014 FIFA U20 Women’s World Cup.

Sullivan evolved into a high profile player in the women’s college game, earning individual awards throughout her sophomore and junior years. Her biggest focus was to win the coveted NCAA National Championship with her teammates. While the final game had evaded Stanford her first two years, her junior year had the makings of a fairytale ending. Sullivan had hit her stride, both at Stanford and in her national team duties.

She debuted for the USWNT in October, notching four straight caps for the red, white and blue. Sullivan seemed to be on top of the soccer world with Stanford heading into the NCAA tournament as the number one seed.

Five days after her national team play, she took the pitch with Stanford to play Santa Clara for a chance to advance into the Sweet Sixteen. During overtime, Sullivan jumped to block a clearance and landed awkwardly, tearing her ACL. That was not only the end of Stanford’s road to the NCAA College Cup, but a setback to Sullivan’s climb to the top of the soccer world.

“Obviously, I was pretty crushed. I couldn’t believe it happened to me, especially that first night. It was a rollercoaster of disbelief and being devastated at the same time,” Sullivan said of her initial reaction to her injury. “Sometimes bad things happen for different reasons, and it showed me how loved I was. I had a great support system around me in my teammates, family and friends. Because of them, I felt motivated. Once I got over the initial hump, it was time to get going in the recovery.”

Known as “Sunshine” to her teammates for her happy disposition, she knew that attitude would carry her through the tough times that were ahead. Instead of focusing on the negative, she became engulfed in recovery and embraced the lessons she learned throughout the experience. Although she kept a positive attitude, the recovery process did not come without tears and hardships.

“One thing that sticks out is how different you feel. I was doing a very simple exercise in physical therapy, looked up in the mirror to see if I was doing the exercise properly and I almost didn’t recognize myself. I was so used to seeing myself as a strong, athletic person, and I realized in this instance that the road to recovery was going to take some time,” Sullivan said about her appearance following the injury. “Seeing myself like that was difficult not only in that moment, but throughout the entire recovery.”

Without any major setbacks in her recovery, Sullivan was cleared to play for the 2017-18 season, just eight months removed from surgery. Although she was elated to be back on the pitch, everything was different. With the support of her teammates, family and friends, she learned to manage her expectations.

As she eased back into the game, she experienced mixed emotions.  Sullivan would bounce between excitement when she executed a move and found success on the field, and depression when her level was nowhere near where it used to be.  She credits her teammates for the constant encouragement as she recovered, making it easier to step back into her role on the team.

While the roster evolved from the previous season, with new faces and big shoes to fill, the goal for Stanford was the same:  win the National Championship. The Cardinal spent the majority of the season as the top-ranked team in women’s college soccer, recording just one loss to Florida in the third game of the season.  This result left a lasting impression on the team, keeping them humble along their epic journey.

The season was not perfect, but the ending was a close as one can get. Sullivan took the time to smell the roses along the way, instead of dwelling on mistakes. It was this frame of mind that made lifting the coveted NCAA National Championship trophy with her teammates to close out her college career that much sweeter.

“I don’t think I have ever felt so complete. I loved playing for Stanford, and every year we didn’t win it was such a heartbreaker,” she said about finally completing her goal of winning the NCAA National Championship as a senior. “Not many people can say they have completed their college career in this way. It was extremely special. I think that’s the first time I have truly felt like a champion.”

The icing on the cake of a spectacular year was the recognition as the Hermann Trophy winner, announced on January 5, 2018. Flattered to have her name among the list of past Hermann Trophy winners, she once again attributed her individual success to her teammates and the motivation they provided throughout the season. Now that her college soccer chapter has come to a close, Sullivan is already looking to the next journey, professional soccer.

Sullivan is excited to join the Washington Spirit and compete in the NWSL. She is especially looking forward to pushing herself every day, even more so than college. She is ready to tackle this next challenge with her head up and eyes open in order to soak up every bit of knowledge from those around her.

Sullivan is a courageous and hardworking player in pursuit of big dreams. She will continue to push herself to the next level and elevate others along the way. Her positive attitude and influence on her teammates is reflected in her leadership and success on the pitch. Sullivan’s dedication to the game and drive to confront every challenge is admirable and illustrates what it means to be an Amazing Young Woman.