RICHMOND, VA (January 16, 2017) – The ECNL and the Amazing Young Women movement are dedicated to showcasing females that have helped shape the league into the top female youth soccer development platform in the world. As part of the movement, the ECNL is sharing the stories of the amazing young women that make the league what it is today with their efforts both on and off the field.

Taylor Shell is the ECNL Amazing Young Woman Spotlight of the Week. Shell, a current member of the Richmond United ECNL U17 team, is committed to play collegiately at the University of Miami. Just over nine months ago, Shell received news that is every athlete’s worst nightmare. She tore her Anterior Cruciate Ligament (ACL). After thinking her soccer career was over, just shy of a year after the devastating news Shell found herself getting cleared by her doctor for all activities. ECNL Florida marked her first time back on the field with her Richmond United teammates, with fellow club players and their family members on site.

It all began on March 27th of last year when Shell was tackled from behind, collapsing on the pitch.  She was in initial pain, exiting the game with uncertainty about what was really going on with her knee.  It was not until days preceding the incident when she faced the reality that it might be a more serious injury. The Magnetic Resonance Imaging (MRI) confirmed the tear, changing her path to the next chapter.

“My initial reaction was that I thought my soccer career was over, and that I would never touch the field again,” Shell said about her injury. “I also thought I would never be able to play another game with my teammates, a harsh possibility that I faced.”

Surgery was set for May 2nd with expectations of a year or more of rehabilitation. Through hard work and determination Shell soared through the standardized tests and was cleared to play in nine months. While in recovery, she was able to lean on her friends and teammates in the Richmond United organization for support. Aaron Brunner, Richmond United ECNL Director, was also there for support, offering reassurance and connecting her to a role model who battled a similar injury.

Brunner shared a picture of Ali Krieger, U.S. National Team player and professional player for Orlando Pride, of the game in Vancouver where she suffered a torn ACL.This photograph was the inspiration Shell needed to push through the tough recovery. It is hanging on her door, to remind her of the sacrifices Krieger made to get back to the top of her game. This is exactly what Shell wants for herself, to return stronger than ever and a master of her craft. 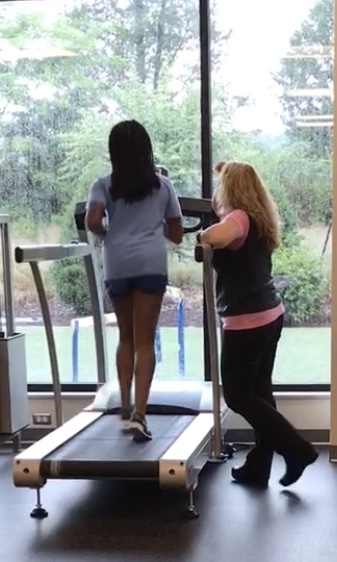 Everything came full circle when the opportunity to meet Krieger in person was a reality for Shell. During the trip to Sanford for the ECNL Florida National Event, Krieger came to speak to the Richmond United teams in attendance. It was the day before Shell was set to make her comeback and first debut on the pitch.

Shell spoke to Krieger about the mental strength and physical pain that came with the rehabilitation process. They both had to endure a good amount of both on their road to recovery. Krieger unfortunately went through this process twice, but her positive spirit and testimony reassured Shell that she can overcome this injury. If you believe in your ability and truly want something, you can get it done. On Saturday, January 6th, all of the pain, hard work and patience became a distant memory when she stepped back on the pitch to join her teammates.

“Usually I am excited and happy to play, but this time I was nervous.  Stepping back onto the field for my first game since the injury was emotional, and one of the most important games of my career,” Shell said about her first game back since her injury. “I was telling myself that this is it. I have to prove that I can be an elite player, or be faced with the possibility that this may not be my future.  Once I heard the younger teams cheering for me, I knew in that moment that I was not only going to return, but be better than before!”

Shell’s minutes were very limited for her return, to ease her back into the swing of things and the demands of the game. Playing about 10 minutes a half (per doctor’s orders) to ease her back into game shape. This did not stop Shell from making an impact. In the final competition of the weekend, she tallied two assists and a goal. Her goal sparked a team celebration that rivaled a championship win, leaving her mom in tears and overcome with joy. It was in that moment that Shell knew she was back. The road to full recovery and playing 90 minutes was still long, but mentally she was right where she needed to be and ready for the next challenge.

This spring Shell will continue to build her fitness and focus, on training, since her team has secured a spot in the Champions League division of the ECNL Post Season.

We wish Taylor Shell the best of luck as she continues her journey back to the pitch. In her final season towards qualifying for the ECNL Champions League division this summer, her final season in the ECNL and her next chapter at Miami. Thank you for sharing your story of recovery!