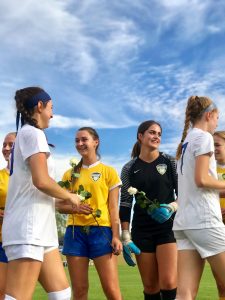 RICHMOND, VA (November 28, 2017) – The ECNL and the Amazing Young Women movement are dedicated to showcasing females that have helped shape the league into the top female youth soccer development platform in the world. As part of the movement, the ECNL is sharing the stories of the amazing young women that make the league what it is today.

We are excited to announce Lena Provenzano as the ECNL Amazing Young Woman Spotlight of the Week. Provenzano is a member of the Albion Hurricanes FC (AHFC) ECNL U17 team, who participated in the first ECNL National Event of the 2017-18 Season in Phoenix, AZ two weeks ago.

The past two months have been one of devastation and perseverance following the aftermath of Hurricane Harvey.  The massive storm impacted members of Provenzano’s team, club and the Houston community, leaving her with her own story to tell.

Provenzano was with fellow AHFC teammate Olivia Green when the storm descended on their hometown.  Unable to drive, she stayed at Green’s house overnight, not knowing what lie ahead. Six inches of water consumed the first floor, with the level continuing to rise and forcing the family to evacuate for higher ground. 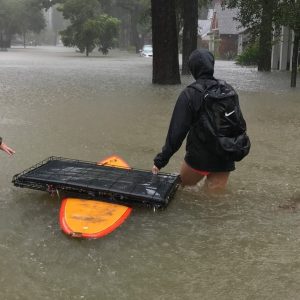 She would remain separated from her own family for five days, after Provenzano’s father made an attempt to retrieve her, even becoming stranded himself.  While, her family and house were spared from the massive flooding in Houston, Provenzano was determined to step up and face the tragedy head on.

Since Hurricane Harvey, Provenzano has witnessed an overwhelming amount of support throughout the community, especially within AHFC as many citizens have volunteered to help friends and family rebuild.

“I love the city of Houston. It’s where I grew up, and what I call home. Seeing the strength of community during the rebuilding process has been unreal.  I am proud to be a part of the positive response from a tremendous tragedy,” Provenzano said about the atmosphere the last few months in her hometown.

The strong community bond forged from this catastrophe inspired Provenzano to reach out to a fellow ECNL Member Club months later when disaster struck.  Santa Rosa United, a club based in Northern California, was heavily impacted by the wildfires that engulfed the region.  Similar to the floods in Houston, families were displaced and lost their homes.

The wildfire occurred just weeks prior to the first ECNL National Event, where Provenzano’s AHFC team was slated to play Santa Rosa United. Both clubs had been through life changing events within months of each other, with the beautiful game bringing them together. Provenzano immediately knew she had to do something for this match.

It was not long before Provenzano concocted a simple plan to execute in Phoenix.  The AHFC team presented a yellow rose to each Santa Rosa United player during the international walkout, prior to kickoff.  The rose symbolized solidarity as they began the rebuilding process in Santa Rosa, with yellow representing the state flower of Texas and the type of flower representing the sister ECNL member club.

“I wanted to show them that we are here to help and support in any way that we can. The ECNL is a family. No matter how far we may live away from each other, we will always have a connection with the people in this league that extends beyond the playing field. The rebuilding process is really difficult, but it is possible. I wish Santa Rosa United and the Northern California communities affected by the wildfires, a fast recovery as they move forward.” Provenzano said about the message she wanted to convey to the Santa Rosa United team and club.

The ECNL is more than a league and what happens on the pitch. Provenzano and her teammates showed their character and overwhelming kindness through a simple act, which did not go unnoticed. Fellow member clubs have also given back to Santa Rosa United.  Both Mustang SC and Pleasanton Rage joined forces to help raise money for the club and producing “Sonoma Strong” bag tags to support the cause.

Thank you, Lena Provenzano, for embodying what it means to be an Amazing Young Woman and the compassion you have shown for your ECNL sisters. Your leadership and initiative to effect positive change in the ECNL community is inspiring. We wish you the best of luck in your future endeavors!