RICHMOND, VA (November 21, 2017) – The Elite Clubs National League (ECNL) announces Lizzy Crist as the November S’Hero of the Month award recipient for individual and community leadership. As the S’Hero of the Month, Crist exemplifies the qualities that the Amazing Young WomenTM movement embodies. Her leadership and pursuit of excellence on and off the soccer field is a story of empowerment, hard-work and goodwill. 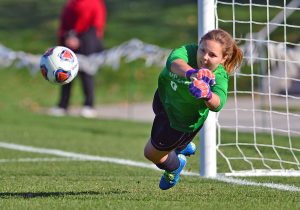 Lizzy Crist left a name for herself in both the athletic and academic sector while attending Washington University in St. Louis (Wash U). Her leadership skills and relentless drive to make a difference made her stand out amongst her peers, helping her to earn the prestigious NCAA Woman of the Year award this year.

On any given day, Crist can be found in either a classroom or laboratory.  She is an avid student with the belief that there is always something to learn, which made the decision to continue her education and pursue a Ph.D. in Biomedical Engineering easy. Crist attributes the values learned from the game of soccer to helping mold her into the person she is today.

The discipline and work needed to become a collegiate student-athlete is the foundation that translates into her work in her field of study: STEM (Science, Technology, Engineering and Math). Crist is determined to leave a positive mark in the STEM field, with the hope to teach and empower others along the way. 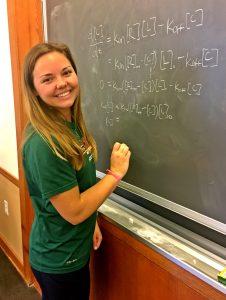 Her drive to make a positive impact began early on, when Crist’s grandparents encouraged her to join a local soccer league at the age of four. She fell in love with the beautiful game, and was drawn to the goalkeeper position rather quickly, a position that normally sees players running for the hills when it is their turn to jump between the posts.

Her fearless nature on the field leaked into her academic life, where she developed a perfectionist approach to learning. Crist constantly looked for new challenges in the classroom, especially when it came to math and science, which led her to search for the next soccer test. She ultimately landed at Minnesota Thunder Academy (MTA), current ECNL Member Club, where she finished her final two seasons as a youth player.

The decision to pursue a higher level of competition with MTA gave her a new respect for the game and helped prepare her for the obstacles that lie ahead in the college chapter. The mental toughness and resilience Crist developed during her time in Minnesota was well worth the sacrifices made along the way.

As senior year neared, it came time to narrow down a college. Furthering her education was never a question, as academics always came first for Crist. She also wanted to continue her playing career, so finding an institute with a prestigious academic profile and an opportunity to play soccer was yet another challenge. 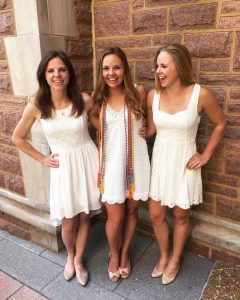 Crist found her dream school rather quickly, with some influence from her sister Katie, who was a member of the swim team at Wash U at the time.

“When I stepped onto the Wash U campus, I felt comfortable. I could see myself walking the halls and calling it home. The positive vibes from the overall environment coupled with the strong academic mentality of the soccer team catapulted Wash U to the top of my list. The balance of soccer, academics and social life encompassed all that I was looking for in a college.” said about her decision to play at Wash U.

Crist gained admission to Wash U, committing to be a member of the women’s soccer team as well. Her playing career was unique, detailing a story of hard work and perseverance. Crist saw action in just five games during her freshman season, working her way to fifteen starts as a sophomore.

As she earned more time between the posts, Crist became an unstoppable force.  She went on to set school records in both shutouts (31) and goals against average (0.39), and captaining the team her final season.

Throughout her career she was recognized for her stellar athletic performance, changing the game for the Wash U program for the better. Crist was named the 2016 NSCAA National Player of the Year, the 2017 DIII Honda Player of the Year and most recently the 2017 NCAA Woman of the Year. Any of the three individual accolades are enough to boast about, but the most memorable honor for Crist was being able to hoist the 2016 National Championship trophy with her teammates. 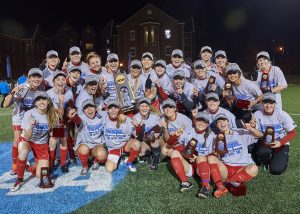 “Being named the 2017 NCAA Woman of the Year is an exceptional honor, and very humbling. The spotlight has fixated on my on-field accomplishments recently, but this award truly extends so much further than my soccer ability. I credit this award to the dedication from my coaching staff and administration, relentless support from my parents, and the remarkable group of talented women I had the privilege to play alongside over my four-year career.” Crist said about her most recent honor. “This award is a testament to Wash U’s commitment to students in the pursuit of achieving a scholar-champion level of excellence. I am extremely proud to represent my teammates, Wash U athletics, and Division III sports.”

The soccer field was not the only place she excelled. Crist graduated with a 3.9 overall grade point average, receiving awards for community service, leadership and biomedical engineering. Her drive to excel in her studies, and become a scholarly force in her field of study helped earn her the 2016 NSCAA Scholar Player of the Year honor. Crist’s impact is hard to ignore, elevating her passion to learn and the drive of her fellow classmates. 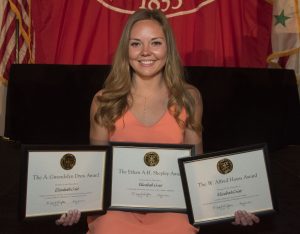 Throughout her undergraduate experience, she volunteered with a program called Einstein Explorers (EE), an initiative that leads science experiments for patients at the children’s hospital. Working with young cancer patients and their siblings was more about distracting them from their hardships over that hour than science. Crist loved teaching them science, but the best part was seeing them light up and enjoy their time during her hour-long visits.

In addition to EE, Crist worked as a tutor and a teaching assistant in the biomedical engineering program. She used teaching as tool to empower and encourage young people, women in particular, to enter the STEM field. Currently she works with “Science for All”, a program at the University of Minnesota, that encourages young people in middle and high school to pursue a career in STEM.

Once Crist discovered her love of biomedical engineering, it became clear to her that she had found her life’s work. While her long-term goal is to become a professor in the field, she spends the present being active in the community to educate and inspire others.

As a first-year Ph.D. student, Crist is currently on rotations, nearing the deadline to declare the research project she will devote her time to and defend. She aspires to concentrate in cancer cell migration. Her decision to enter into research about cancer stems from the complexity of the disease and the affect it has on all walks of life.

The challenge that cancer research presents motivates Crist to continue her education.  Throughout her Ph.D. program, she hopes to contribute to the scientific community and make scientific discoveries.

Crist’s steadfast pursuit of excellence on the pitch, in the classroom and now in the scientific field is noteworthy.  Her selflessness and passion to empower young people in the STEM field, has earned Lizzy Crist the ECNL S’Hero of the Month recognition. We look forward to following Crist as she continues her journey towards becoming a professor in the biomedical field.