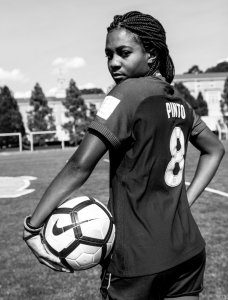 RICHMOND, VA (July 26, 2017) – The Elite Clubs National League (ECNL) today announced Brianna Pinto as the 2016-17 ECNL S’Hero of the Year award recipient. As part of Amazing Young WomenTM movement, the ECNL is sharing the stories of S’Heroes who are role models for our nation’s young female athletes who are balancing their drive to become elite athletes with the pressures of fitting in with social peers.

Pinto has been playing in the ECNL for the past four years with CASL (now NCFC Youth), based out of Raleigh, North Carolina. In January, Pinto became one of the youngest call-ups to the full U.S. Women’s National Team at the age of 16 after making her mark in the 2016 U17 Women’s World Cup for the United States and making an impressive showing at the U23 U.S. Women’s National Team Training Camp. She is committed to play collegiate soccer at the University of North Carolina, following high school graduation in 2018.

“I am very honored and humbled to accept the 2016-2017 ECNL S’Hero of the Year award. Playing soccer with CASL, various U.S. Youth National Teams and my experience with the Senior Women’s National Team has opened a world of possibilities to me. I have traveled across multiple continents, competed against the world’s best young players, learned valuable life lessons, and made lifelong friends along the way,” Pinto said about receiving the S’Hero of the Year award and the positive impact soccer has had on her life. “I know that as long as I continue to work hard, stay focused and remain persistent, I will have the opportunity to live the life I always imagined. I would like to extend my immense gratitude to my family and friends for encouraging me along the way and to the ECNL for honoring me with this prestigious award.” 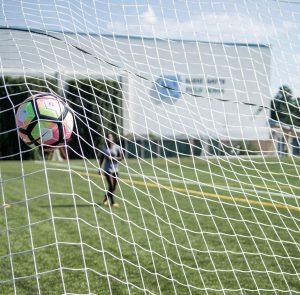 Pinto received an impressive 32% of the 2016-17 S’Hero of the Year votes, narrowly beating out fellow S’Heroes, Morgan Andrews and Shea Groom, who are both current National Women’s Soccer League (NWSL) players and ECNL Alums.

Since we last spoke to Pinto, she has continued with her success on the pitch. She has been training with the NWSL’s Washington Spirit, who have several ECNL Alums on the roster including: Lindsay Agnew, Cameron Castleberry, Cali Farquharson, Mallory Pugh and Arielle Ship. She has also traveled around the world playing in Karlstad, Sweden, Birmingham, England and Rhine, Germany while representing her country. Pinto is currently in Seattle, WA at the U23 U.S. Women’s National Team camp, excited to have the chance to return to the location of her favorite ECNL National Event.

She will be graduating from high school in January of 2018 and plans to continue to train daily until she heads to UNC next summer to begin her collegiate career. We will continue to follow Pinto’s career as she moves on to make an impact in college in the Atlantic Coast Conference (ACC). Click here to view the 2016 ECNL College Impact in the ACC. 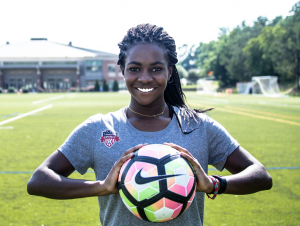 To read more about Pinto’s story and why she defines what an ECNL S’Hero truly is, click here.

Briana, thank you for being an Amazing Young Woman and sharing your story. Your determination and hard work will continue to take you places. We look forward to seeing you tackle the next chapter, and are truly honored to call you an ECNL Alum and the 2016-17 ECNL S’Hero of the Year.

ECNL Brings Many of Nation’s Best Officials to National Events