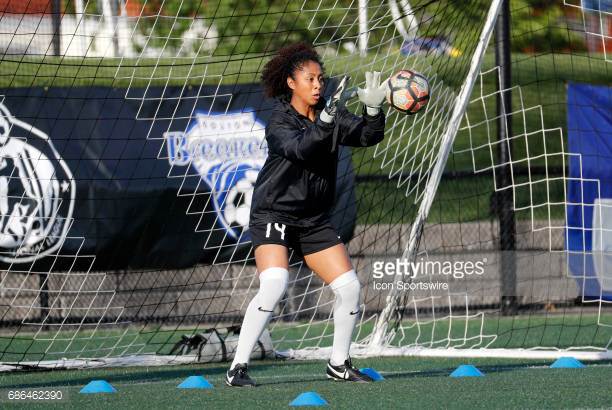 RICHMOND, VA (June 14, 2017) – The ECNL and the Amazing Young Women movement is dedicated to showcasing females that have helped shape the league into the top female youth soccer development platform in the world. As part of the movement, the ECNL is encouraging amazing young women to share their stories. We are excited to announce Abby Smith as the ECNL Amazing Young Woman Spotlight of the Week. Smith plays in the National Women’s Soccer League (NWSL) as a goalkeeper for the Boston Breakers, is Dallas Texans ECNL Alum and just returned from her first full camp with the senior US Women’s National Team.

Smith’s dreams to play professionally and represent the United States on the senior team are finally being realized, but just over a year ago she faced an injury that ended her NWSL rookie season as it was getting started. In the 29th minute of her second game in the NWSL, Smith landed awkwardly while coming out of the 18-yard box trying to cut off the angle of a shot. There was no contact on the play, and it was not until she turned to retreat to the box that it became apparent there was something wrong. She suffered a ruptured patella tendon, requiring surgery and significant recovery time.

“It was a freak accident that I do not think anyone expected. It was one of those things that once it happened, I knew I could not change the injury so I knew I had to move forward and take the recovery day by day. I had my good days and bad days, but once I was able to acknowledge that I needed to take it slow and trust the process, it became easier,” Smith said about her injury and recovery.

Smith grew up in Plano, Texas where she played club soccer for the Dallas Texans ECNL team, going on to play collegiate soccer at the University of Texas.  Smith was no stranger to the term ‘Texas Strong.’ A phrase and motto that stuck with her, coming to the forefront early on in her professional career.

Smith embraced “Texas Strong” both mentally and physically, living and breathing the meaning of these two powerful words over the 10 month recovery period. Although it was a slow process, she regained the ability to run, slowly progressing to kicking a ball and eventually get back on the pitch for the 2017 NWSL Preseason.

After a year, she was back on the pitch with the Boston Breakers. Although she was nervous, with each practice she became more comfortable and confident between the posts. She earned a starting spot as goalkeeper for the Breakers and has been the anchor for the defensive efforts starting all eight games thus far. She has been nominated for NWSL Save of the Week four of the eight weeks this season, securing the NWSL Save of the Week in Week 6 for this save against Nadia Nadim, 2015 ECNL S’Hero.

“Receiving the weekly honor was really fun, because I am in good company. There are a lot of quality moments involving goalkeepers, and I love that the NWSL recognizes the Save of the Week. I am appreciative to receive this recognition, but I am always looking forward to the next game,” Smith said about her first NWSL Save of the Week win.

Smith is no stranger to success on the soccer pitch. She was a four-year captain for the Texans, who were a perennial national championship contender in the ECNL.  After an extensive recruiting process, Smith made the decision to commit to the University of Texas.

Once she arrived at Texas, she continued to excel on the pitch and personified the Longhorn expression ‘Texas Strong.’ She made an immediate impact for the Longhorns and earned her spot between the pipes halfway through her freshman season, where she remained until her senior year. Smith tied the freshman record for shutouts and set the rookie mark for the lowest goals against average in program history. She was also recognized on the Big 12 All-Newcomer Team her freshman year.

Following her excellent freshman year, Smith sustained her dominance between the pipes. She received All-Big 12 honors each of her four years as a Longhorn, two on second team and two on first team. Smith secured her place in the Texas record book as the all-time shutout leader in school history. In addition to her numerous accomplishments on the defensive end, she also found success on the offensive end scoring three goals, including this goal that was featured on ESPN SportCenter’s Top 10 plays.

After her success in college, Smith was excited to continue her soccer career and was drafted by the Boston Breakers with the 27th overall pick. She has fought back with the resilience and toughness that Texans pride themselves on, looking better than ever. Smith has set personal goals for the rest of the season, excited to raise the bar personally and for others involved in the beautiful game.

We wish Abby Smith the best of luck with the rest of her NWSL season. Thank you for being an Amazing Young Woman and sharing your UNSHAKABLE story.