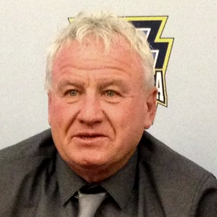 RICHMOND, VA (June 1, 2017) – Ed Leigh, the long-time director of ECNL Member Club FC Bucks, has impacted thousands of young players and coaches throughout his tenure as a soccer coach with his humble approach to the beautiful game. At the ECNL New Jersey National Event, the ECNL honored him with a Lifetime Service Award in recognition of outstanding service to the soccer community and inspiring generations of athletes. Leigh is currently battling Amyotrophic Lateral Sclerosis (A.L.S.), also known as Lou Gehrig’s Disease.

In a truly touching presentation on Saturday, May 27th at the PDA Soccer Complex, ECNL Commissioner, Jen Winnagle, and Players Development Academy (PDA) President, Tom Anderson, presented Ed Leigh with the Lifetime Service Award in front of Leigh’s family, former players, fellow coaches and friends from all over the country. The impact he has made on the game of soccer, especially in Pennsylvania and Northeast region, was apparent by the number of loved ones who gathered to witness Leigh receive the award.

He played college soccer at Temple University and played semi-professionally on many teams for the next 2 decades around the Philadelphia area, but his accolades as a coach are a mile long. He began coaching for FC Bucks about fifteen years ago and quickly became the face of FC Bucks girls’ soccer. Leigh brought the first National Championship for a girls’ team back to Pennsylvania in 2009 and has over 20 State Cup titles as a head coach. Leigh spear-headed the move for the club to join the ECNL. He is in the Hall of Fame for Archbishop Ryan Girls Soccer as well as Southeast Pennsylvania Soccer. In 2016, EPYSA honored him with a Service to Youth Award. 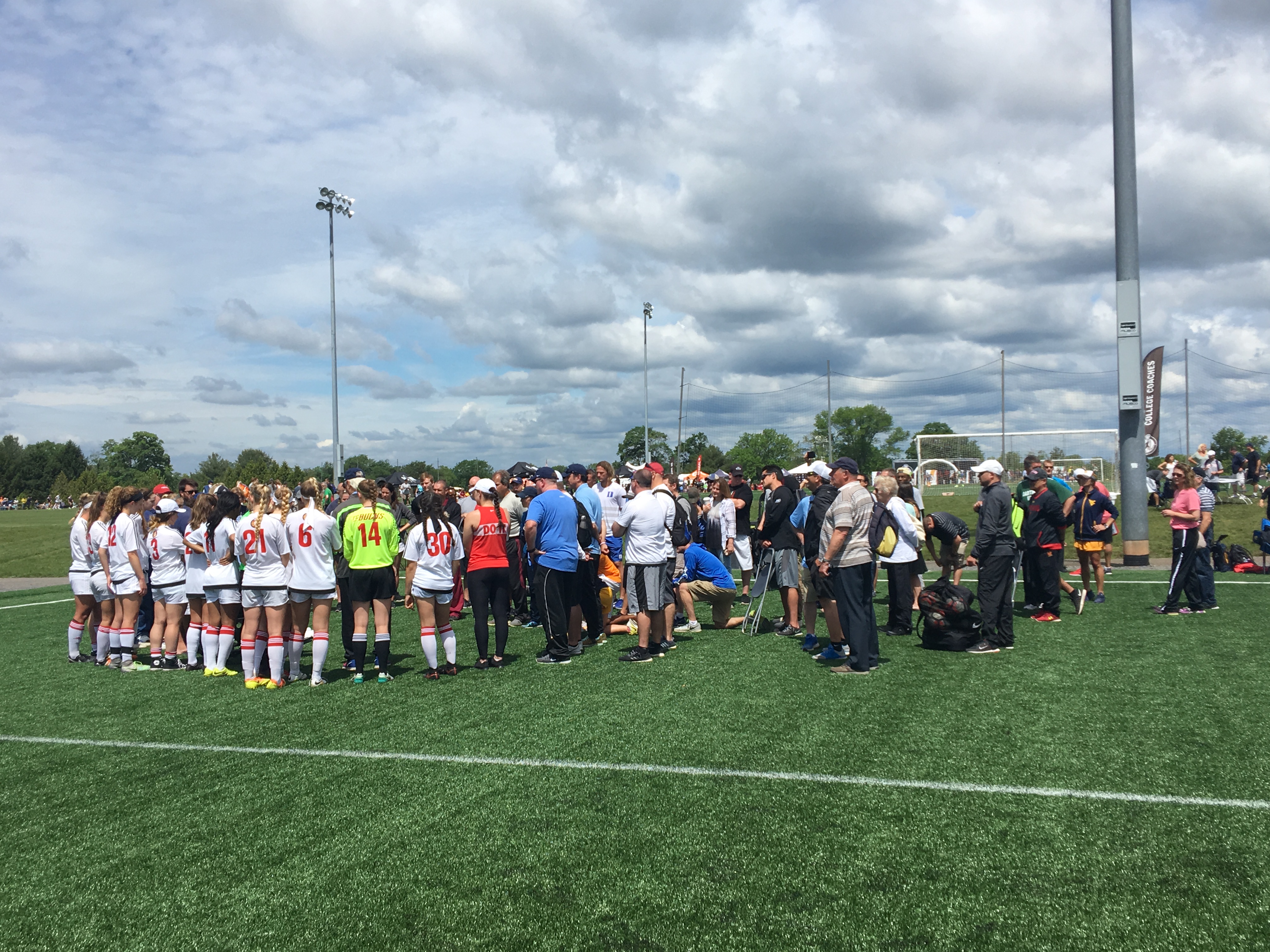 Gathering of Ed Leigh’s friends and family around the soccer community to watch him receive the ECNL Lifetime Service Award in New Jersey on May 27th, 2017.

Leigh is a beloved staple in the soccer community who has helped hundreds of players receive scholarships to play at the collegiate level and mentored dozens of young coaches, but it his relationships with players and colleagues that has set him apart from others. He was an electrician by trade, but his life’s work was on the soccer pitch where he instilled self-confidence in each of his players and helped develop well-rounded players and people for their next phase in life.

Many of his former players attended the presentation in New Jersey, and many were already there because they are now coaches themselves. His encouragement as a coach has inspired numerous young women to become coaches at colleges such as his alma mater, Temple University, as well as California Institute of Technology (Caltech). He has been a father figure to many players and coaches and their reach and his influence is felt all over the country.

“He completely shaped who I am as person, as well as who I am as a coach,” his former player Taylor Houck who is currently the Head Coach at Caltech said about Leigh as a coach. “As a player, he gave me direction and gave me a purpose. I don’t know if I would have gone to college if it wasn’t for soccer and more importantly for him. He changed my life. He is the most amazing person I know.” 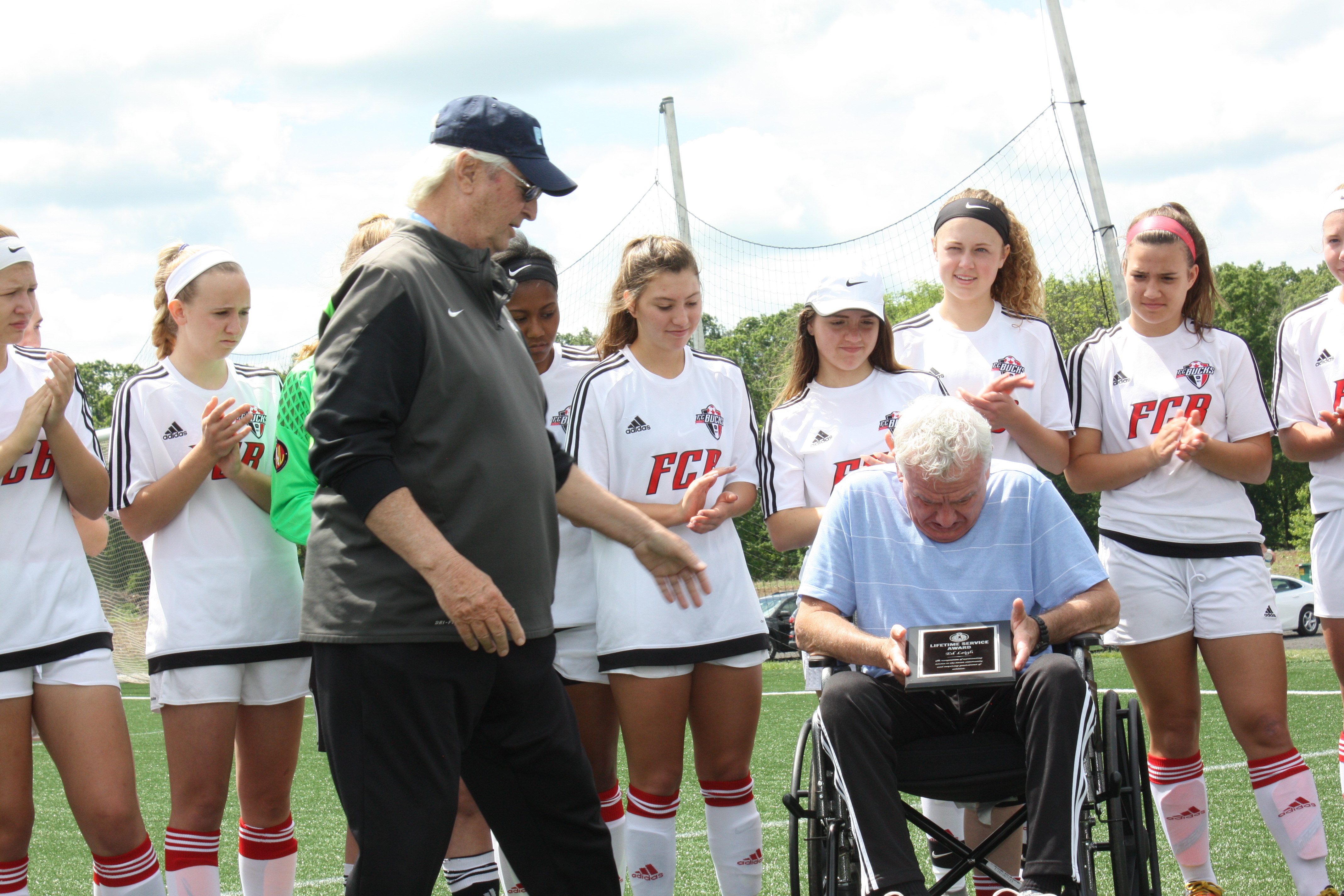 Leigh valued the relationships with his players over the number in the win column and the way he coached and treated his players is what has cemented his legacy. The way he coached was second to none, the way he read the game and explained it to his players in a professional, humane way. His approach as a coach reflected who he is as a person and that is a man who looked out for his players as people and created a family environment with his teams at FC Bucks.

“Eddie is like a second father to me. He was somebody I gravitated to as soon as I met him. The way that he has treated his players is the biggest takeaway for me. The way his players view him, the amount of affection and respect, I have never seen anything like that for a coach. He is a guy that means the world to me, but he is a guy that means the world to so many players and parents.  Everyone he has touched has been impacted in a positive way, and will continue to carry on his life’s work.” Dan Mannella, Director of Coaching at FC Bucks and long-time friend of Leigh said.

The amount of respect throughout the soccer world for Ed Leigh is a true reflection of the impact and reach he has had as a coach not only with his players, but with fellow club coaches, college coaches and parents. He has unfortunately been dealt one of the toughest hands imaginable and has graciously fought back against A.L.S. over the past five years. The ECNL is incredibly honored and proud that Leigh has been a part of the ECNL family from the foundation.

“We are always going to be by his side through this fight. He is unbelievable! I love him,” his former player Alexa Carugati said fighting back tears, alongside former player Kaitlyn Kerr. If you would like to give back to Ed Leigh, a GoFundMe has been started on his behalf to support his family in his continued fight.

Eddie, thank you for giving your life to the beautiful game.  Your impact will continue to inspire others.