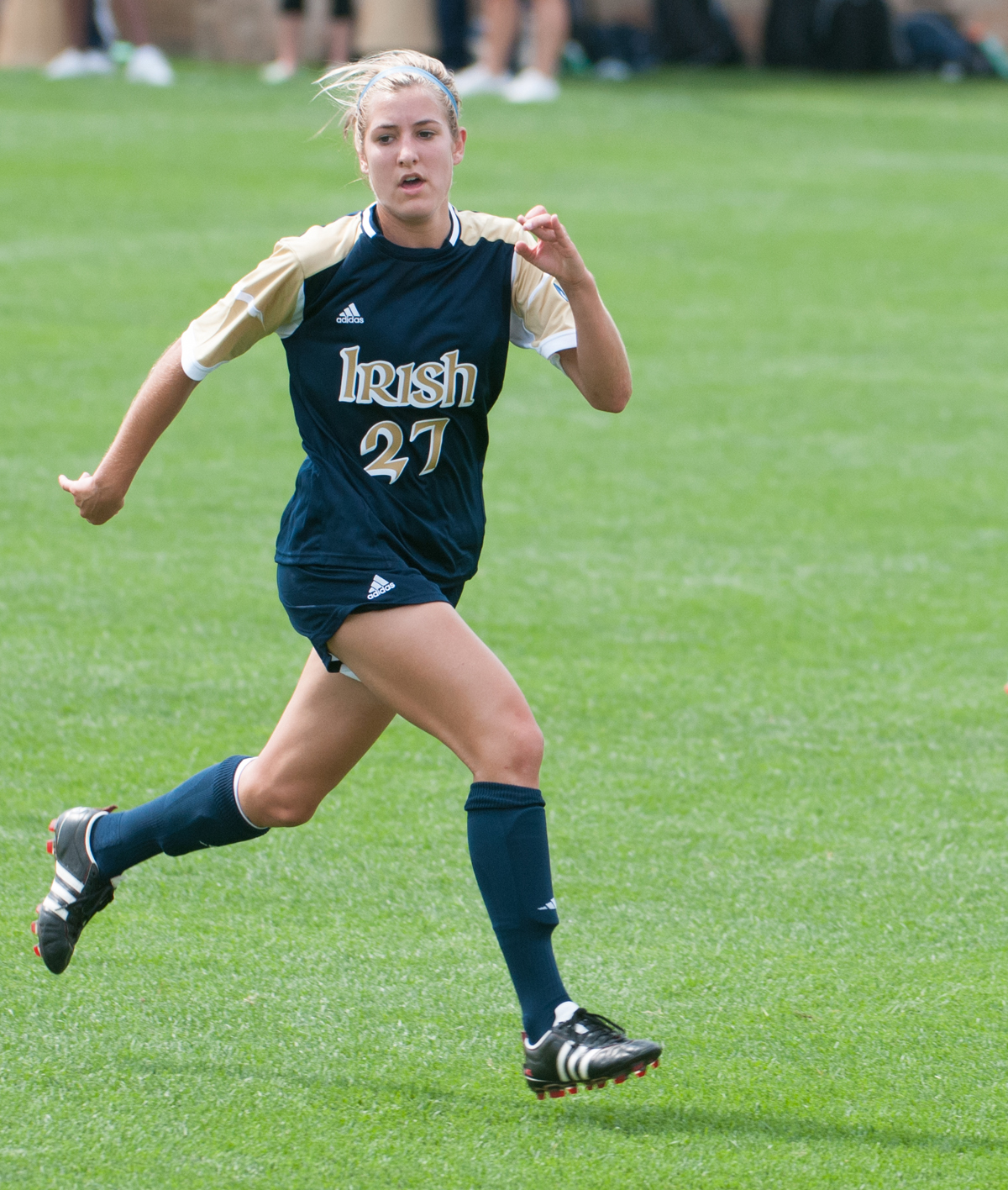 RICHMOND, VA (April 13, 2017) – The ECNL and the Amazing Young Women movement is dedicated to showcasing females that have helped shape the league into the top female youth soccer development platform in the world.  As part of the movement, the ECNL is encouraging amazing young women to share their stories. We are excited to announce Kaleigh Olmsted as the ECNL Amazing Young Woman Spotlight of the Week. Olmstead is a current senior at the University of Notre Dame and a Challenge Soccer Club ECNL Alum who has started a project called ‘NoBody is Perfect’ to combat eating disorders.

Olmsted is a native of The Woodlands, Texas and began playing soccer when she was 5 years old. She played recreational soccer until age 10, when she discovered travel soccer in Challenge SC.  She began playing ECNL when she was 13 years old through her high school career. Olmsted was recruited by Randy Waldrum at Notre Dame, being named a Top Drawer Soccer four star-recruit.  Although she had several options, she found Notre Dame to be the best fit not only for her soccer career, but her education as well.

Olmsted immediately noticed the pressure on young women and their body once arriving at college and experiencing this new environment firsthand. During her freshman year she heard the phrase ‘Freshman-15’ constantly, and began noticing real changes in her friends and their body image. Olmsted grew frustrated with this being the societal norm.  She even heard stories from teammates in other programs across the country with the same issues and pressures being put on these young women from peers and coaches.

After her sophomore year this frustration became all too real when one of Olmsted’s close friends developed an eating disorder.  It was time to learn more and become involved with finding a solution to this growing problem.  She began to research the variety of causes and signs to look for in people developing eating disorders. As a Pre-Med student planning on pursuing a medical career, Olmsted’s interest was peaked in finding out what factors went into developing eating disorders, and what was being done to combat them.

“Several people who were close to me developed eating disorders.  This disease is unbiased and can effect confident, powerful individuals who you would never expect. I struggled to understand the logic behind it.” said of the breaking point when she decided to act on her frustrations. “My passion for biology kicked into overdrive, and I started researching the many causes of eating disorders.  I wondered if this disease is curable, propelling me further into research. The deeper I went into the inner workings of this issue, the more I realized how common it really was.  Due to the lack of funding, there was not a lot of research on hand dissecting the disorder.  This was the motivation I needed to take action.”

According to the National Eating Disorders Association, 20 million women and 10 million men in the United States will experience some sort of eating disorder in their lifetime. The most startling fact to Olmsted was that eating disorders have the highest mortality rate of any mental illness.  How could a disease this dangerous be so grossly underfunded?  Olmsted began mapping out a plan to both raise awareness about the disease and promote positive body image.  She also strategized how to but to raise money towards funding a research and furthering the discovery and possible cures for eating disorders. 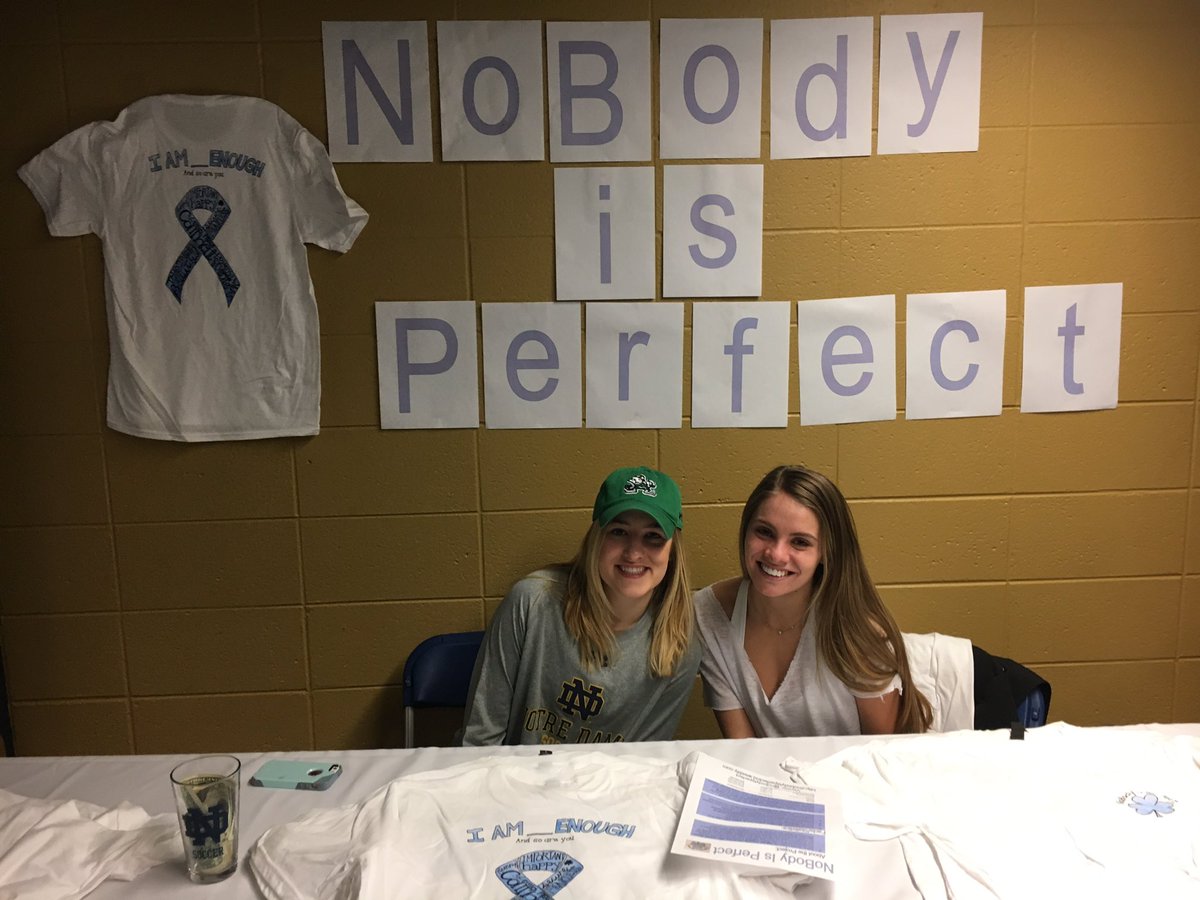 Two years of hard-work and sweat equity lead to the launch of the project ‘NoBody is Perfect’.  Olmsted launched a website and designed t-shirts to raise funds and awareness for her cause. On top of her Pre-Med track, Olmsted is also an art studio major.  Utilizing her knowledge in both areas allowed her to create the artwork for the shirts, making her project come to life. She officially launched her website on January 17, 2017. All proceeds from t-shirt sales will go to the National Eating Disorders Association to fund research.

While this is a one-time project for Olmsted, she hopes she is able to raise awareness and money for the cause, and instill others to do the same through other initiatives. The power of knowledge and passion can cause a ripple effect, with the hope of minimizing this disease in the future.  She will be graduating from Notre Dame next month and applying to medical school in June to continue here dream of making a difference. Olmsted is unsure which field of medicine she will specialize in, but is looking forward to figuring out which will be the best fit for her.

We wish Kaleigh Olmsted the best of luck with the NoBody is Perfect project, as well as her future endeavors in the medical field. Thank you for being an Amazing Young Woman and working to raise awareness on an issue that effects so many.  To learn more about NoBody is Perfect, click here.

Girls ECNL Expands to Include the U13 Division