RICHMOND, VA (February 14, 2017) – The Elite Clubs National League (ECNL) today announced Daphne Corboz as the February S’Hero of the Month award recipient for individual and community leadership. As part of Amazing Young WomenTM movement, the ECNL is sharing the stories of S’Heroes who are role models for our nation’s young female athletes who are balancing their drive to become elite athletes with the pressures of fitting in with social peers. 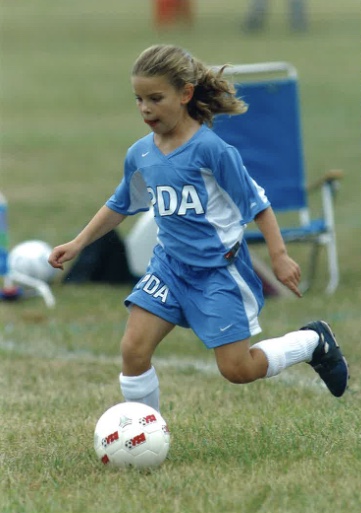 Daphne Corboz recently returned stateside to become a member of Sky Blue FC in New Jersey, one of ten teams in the National Women’s Soccer League (NWSL). After playing two years with Manchester City in England, Corboz was ready to make a change and face the next challenge, eager to learn more about what the sport of soccer has to offer.

Corboz is a PDA ECNL Alum, where she played eight years during her youth career, winning the U17 ECNL National Championship in 2010. She continued her love for the game, playing for Georgetown University where she was a three-time All-American selection and is the current record holder as the highest scorer in Georgetown women’s soccer program history with 47 of goals. Along with her decorated youth and collegiate careers, she has been called into several U.S. U23 Women’s National Team camps.

Corboz hails from a soccer family.  Her father played professionally in France, while her older brother continued his playing career at Rutgers University and now plays professionally, and her younger sister is currently playing at Georgetown having followed in her footsteps. In France, soccer was not a popular sport for girls, so her dad was not keen on letting her play until he was exposed to the popularity of girls’ soccer while taking her brother to practice.

It was not until Corboz was seven years old, when she joined her first team, and became a true student of the beautiful game. Her passion grew at a rapid pace, becoming her first love and dependable outlet. After she began playing, her younger sister followed suit, and the backyard quickly became a soccer training sanctuary for the entire family.

Soccer is a very important activity to the Corboz family, but education was always the top priority. Corboz has always been a devoted student, with a special interest in both math and science, peaking her interest in the medical field early on. In considering future career paths, she set her sights on becoming a doctor, which played a big factor in where she was going to continue her soccer career.  Corboz used soccer as a vessel, and a way into the school that would fulfill both her soccer and academic ambitions. 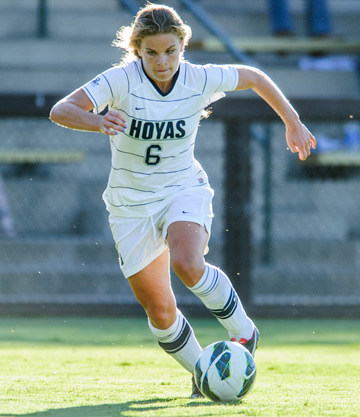 Georgetown met all the qualifications she was looking for in the next phase of her life. The school ranked in the top 25 both academically and in athletics, so after one visit Corboz knew that it was the right fit for her. In addition, her decision to follow a pre-med track was confirmed when she observed a few classes, leaving her intrigued to join this particular academic environment.

Once at Georgetown, she established herself immediately scoring 10 goals and earning Big East All-Rookie Honors her freshman season. There was no sophomore slump for Corboz, as she continued to flourish setting a Big East record with 11 points in one game, where she scored five goals. Adding to this, she set a program record for most single season points (44). Corboz was named the Big East Offensive Player of the Year, going on to become the youngest player selected to the All-American First Team.

Junior year started off on a different note, where she suffered an injury early on in the season.  She tore ligaments in her ankle, but that was no match to her will to get back on the field. She worked hard to get back to playing with her teammates, swimming to stay in shape.  Corboz did not miss a beat, as she returned in record time, leading the team with 27 points. She finished the season with 13 assists, which tied the Georgetown single season record and led the Big East Conference. Corboz admits that she may have been a bit premature on her return to play, but she could not fathom sitting out any longer and missing opportunities to play with her fellow Hoyas. It all worked out in the end, as she concluded her third season as a Big East Academic All-Star selection.

Her senior year was particularly special because her sister, Rachel, was right alongside her for preseason. This marked the first time the two played on the same competitive team, as they attended different high schools growing up. She continued her on-field success leading the Big East in scoring, earning Big East Midfielder and Offensive Player of the Year honors and breaking her single-season assists record from the previous year with 18 assists. None of these accolades compared to the joy she felt playing with her sister. 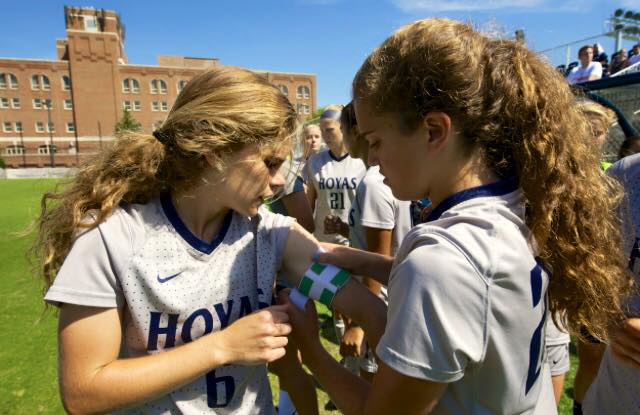 While she was succeeding on the field, she was also excelling in the classroom, working towards her dream of becoming a doctor. In 2015, she was accepted into the Robert Wood Johnson Medical School at Rutgers University. She was then faced with the biggest decision yet, whether to continue her soccer career as a professional or continue her studies and go straight into medical school.

“I never thought about playing professionally,” Corboz said of the interest she was getting from both clubs overseas and in the NWSL. “It never really crossed my mind.  I was having so much fun playing and enjoying the little moments, and then I was faced with the option. It was a great place to be, but one of the toughest decisions I had to make because I was passionate about both soccer and my career.”

Becoming a doctor was Corboz’s long-term goal, making medical school the priority, but if she were granted a deferment the choice to pursue professional soccer was on the table. A post graduate degree in medicine could be pursued at any time, but professional soccer has a clock and a much shorter life span. Corboz was not ready to give up playing quite yet, so when she obtained a three-year deferment from Rutgers she knew the right decision. She was going to become a professional soccer player.

The next choice was difficult, as there were two opportunities presented: 1. play for the NWSL,which she grew up watching, or 2. travel overseas to play, challenging herself as a player and putting herself in a completely different environment. 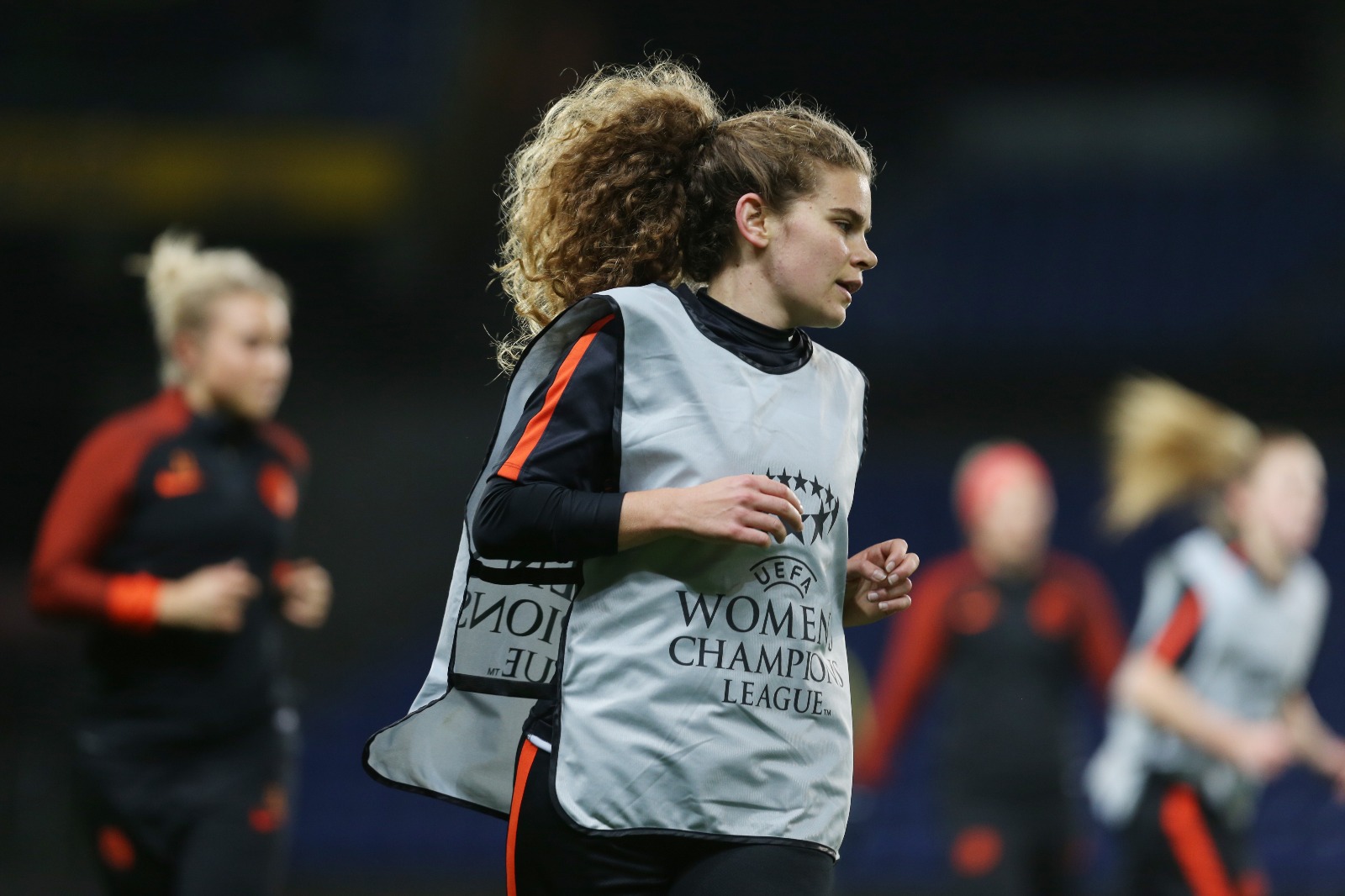 Corboz, never one to back away from a challenge, chose the latter. Although she was drafted by Sky Blue FC, she decided to take a leap of faith and fly over the pond to pursue an international soccer culture. It was a tough decision, but she was ready to embrace a different level and style of play.

When asked to describe the infrastructure and facilities at Manchester City, Corboz simply stated they are “top-notch” and depicts it as a “soccer dream world.”

Corboz was entering another chapter of her life, playing abroad, but many do not know she also continued her studies on the side. Part of her contract with Manchester City was an agreement to let her pursue a Master’s degree in Biomedical Science at Manchester Metropolitan University. Corboz has always multi-tasked, and credits this unique opportunity to both play and go to school to keeping her sane through the process.  She admits it was a tough adjustment at first, but the support system provided by her host family and teammates made England her second home.

In her two seasons overseas, Manchester City won their first Football Association (FA) Women’s Soccer Super League title and qualified to play in the Champions League. Corboz made 30 appearances tallying 4 goals in her campaign with Manchester City. A change in the English League season landscape is what drew Corboz back to her homeland. Signing a contract to play for Sky Blue FC two years after she was originally drafted by the program. 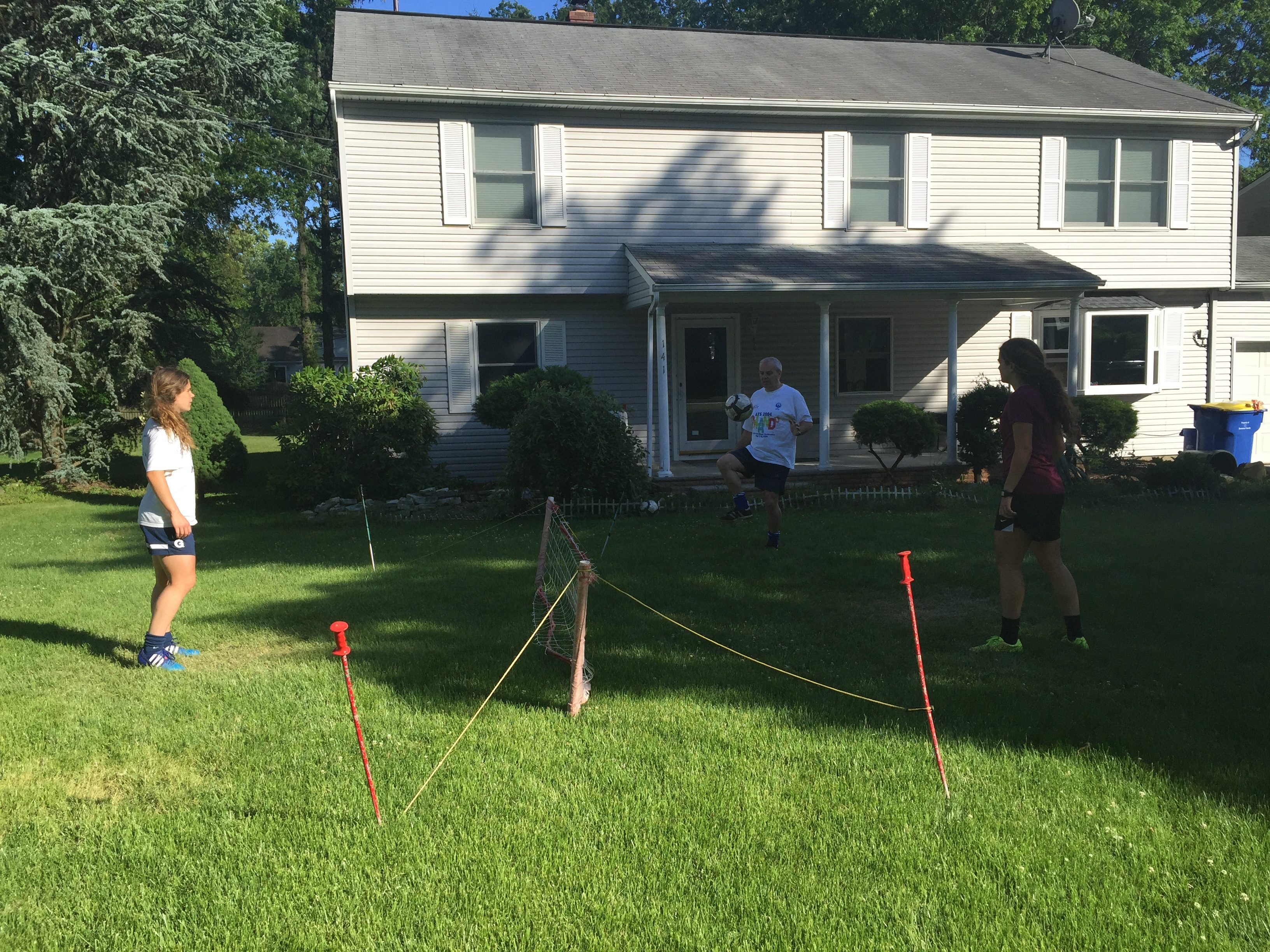 Corboz is currently living in New Jersey, finishing the semester she started in England and training for the upcoming NWSL season. She will receive her Post Graduate Certificate once completing this semester, with a choice to finish her Master’s program from distance or pursue other education opportunities here. Corboz is slated to begin medical school in August of 2018, moving her one step closer to fulfilling her long-term goal. She is excited to continue her lengthy playing career, and ultimately looks forward to offering medical advice, and to help others pursue their passions no matter what the path.

The ECNL sat down with Daphne Corboz to learn more about her on and off the field. CLICK HERE to get to know more about what makes her a true S’Hero.

Get to Know Daphne Corboz