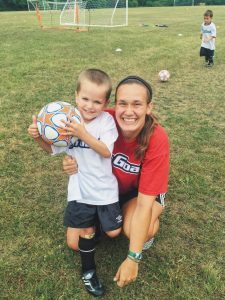 RICHMOND, VA (January 5, 2017) – The ECNL and the Amazing Young Women movement is dedicated to showcasing females that have helped shape the league into the top female youth soccer development platform in the world.  As part of the movement, the ECNL is encouraging amazing young women to share their stories.  We are excited to announce Lauren Spencer as the ECNL Amazing Young Woman Spotlight of the Week. Spencer is a sophomore goalkeeper and is pursuing a degree in Marine Biology at the Hawaii Pacific University (HPU) and is a Michigan Hawks ECNL Alum.

Spencer is a native of Oxford, Michigan where she played for the Michigan Hawks ECNL team her final two seasons of her youth soccer career.  She immediately settled in with the Hawks and became involved in both coaching and mentoring younger players within the community. Inspired by the mentors she had growing up, she felt the need to give back and empower the next generation of young women with the “pay it forward” mentality.

“I want to give the youth in my area an outlet and sounding board to reach out to for help along the journey of life.” said Spencer, “I want them to know that they are not alone, and that I am here to listen, help share my experiences, and help them reach their dreams.  I want to instill confidence in others and continue to give back to my community, especially for young women.”

Last summer, Spencer had the opportunity to coach at a soccer camp she grew up attending called On Goal Soccer (On Goal).  On Goal is a Christian soccer ministry focused on developing the total player. With On Goal, she traveled around the United States setting up camps in communities where they would teach soccer skills, teamwork and ministry. Spencer makes it a point to volunteer as much as possible, as she truly believes in the positive message spread through giving. She volunteers to feed the homeless any chance she can, always looking to lend a helping hand whether it is on or off the soccer field.

Spencer continues her involvement as both a coach and mentor at HPU. Her favorite event is HPU’s Women’s in Sports Day where they bring young girls on campus from the within the community, focusing on those families that have little opportunity to do so on their own. They partner with fellow women’s sports teams and encourage the girls to be empowered by sport, spreading the message that sports can provide opportunities to them.

“It was unbelievable to battle with my teammates, my sisters, and earn a spot in back-to-back seasons,” Spencer said about playing in two ECNL National Championships, “I feel blessed to have been a part of an outstanding group of players and coaches, who truly believe that anything is possible.  The two years spent as a Hawk are etched in my memory, and helped shape the person I am today.  It drives me to keep following my dreams, and to help others along the way.”

Spencer credits the ECNL with providing her with a platform to showcase her soccer ability and to pursue her dream of becoming a marine biologist. She found HPU through the recruiting process and received both athletic and academic scholarships after working hard on the pitch and in the classroom.

“She has a great family and I know community service is a very important part of their lives. As it translates into the team, Lauren was a very, very unselfish player throughout both runs [to the ECNL National Championships]. She always put what was best for the team in front of her own goals, and helped out with other teams when we needed her,  She was a joy to work with on the field.” Doug Landefeld, Director of Coaching for Michigan Hawks said about her time with the Hawks.

We wish Lauren Spencer the best of luck with the rest of her collegiate soccer career and in her quest to become a marine biologist. Thank you for being an Amazing Young Woman and blazing the trail for others.