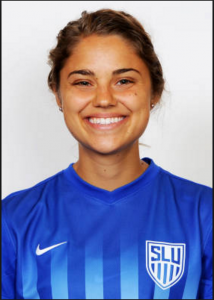 RICHMOND, VA (October 13, 2016) – The ECNL and the Amazing Young Women movement is dedicated to showcasing the females that have helped shape the league into the top female youth soccer platform in the world.  As part of the movement, the ECNL is encouraging amazing young women to share their stories.  We are excited to announce Kacey Bright as the ECNL Amazing Young Woman Spotlight of the Week. Bright is a current senior defender for Saint Louis University (SLU) and ECNL Alumni of St. Louis Scott Gallagher-Missouri (SLSG-MO).

Bright was named A-10 Co-Defensive Player of the Week this week after leading the Billikens to two shut outs last week, bringing the total shut out tally to six on the season. She leads the SLU field players in minutes this season with 1,140. Last week, Bright not only held the league’s number one offensive unit at Richmond to nine shots and no corner kicks, she also contributed offensively versus George Mason with an assist earning her first collegiate point.

Bright has been a consistent presence on defense for the Billikens since her freshman year, where she started every game in conference play. Her defensive presence continued throughout her sophomore and junior years, with Bright helped lead the Billikens to only 1.07 goals against average her junior year. At the beginning of her senior year, she was named to the A-10 Preseason All-Conference Team. Bright has been named to the A-10 Commissioner’s Honor Roll every semester of her collegiate career, speaking to her commitment to both the team and her studies as she works towards a degree in exercise science.

Bright is a native of Fenton, Missouri where she played for Scott McDoniel at SLSG-MO, a current ECNL member club. She played for SLSG-MO from 2003 until she graduated in 2013 and was captain from 2009-2013. While Bright was an ECNL player, she participated in the 2012 ECNL Player Development Program for the Midwest, and named a member of the ECNL U17 All-Event Team at the ECNL Phoenix National Event in 2011.

“The ECNL gave Kacey the opportunity to show people how a positive, intelligent, loyal and determined person should handle challenge and diversity. The league competition, travel, and PDP opportunities allowed Kacey to develop in an environment that made her mentally strong, technically savvy, and able to handle tough moments in competition.” said McDoniel, “Kacey always showed up for the team, always cared for each person in the club, and never once expected anything in return. There are no words to express how proud we are for her success on the field and in the classroom.”

We wish Kacey Bright the best of luck in this current college season, as conference play nears the final week. Thank you for being an Amazing Young Woman.

ECNL Players All Over the U20 Women's World Cup Roster