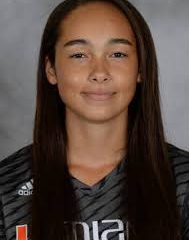 RICHMOND, VA (September 29, 2016) – The ECNL and the Amazing Young Women movement is dedicated to showcasing the females that have helped shape the league into the top female youth soccer platform in the world.  As part of the movement, the ECNL is encouraging amazing young women to share their stories.  We are excited to announce Phallon Tullis-Joyce as the first ECNL Amazing Young Woman Spotlight of the 2016-17 Season. Tullis-Joyce is a current redshirt sophomore goalkeeper for the University of Miami and ECNL Alumni of Match Fit Academy out of New York.

“Phallon is an extraordinarily talented player who traveled a great distance to train and play at Match Fit Academy in order to be able to be part of the ECNL, the best girls youth league in the world. Her talent and ability showcased within ECNL competitions provided her with the opportunity to study and play at the University of Miami,” Match Fit Academy Director of Coaching, Dominick Bucci, said about Tullis-Joyce. “We are extremely proud of her and happy to see her find success at the collegiate level as she continues to develop as a player and student of the game.”

Tullis-Joyce, a native of Shoreham, NY, was a five-year letterman at Longwood High School and impressively awarded Most Valuable Player all five years. She was named to the ECNL New Jersey Best XI in 2014 after a strong showing in goal, which included saving a penalty kick. During that same season, she had an impressive performance in Seattle at the 2014 ECNL Playoffs, having flown home to graduate and returned to Seattle to play the following day.

After redshirting her freshman year, Tullis- Joyce led the team in starts in goal as a redshirt freshman with nine starts, making 24 saves on the season. As a redshirt sophomore, she has seen the majority of minutes in goal for the Hurricanes so far this season. She tallied 319 minutes and 15 seconds consecutively without conceding a goal. Tullis-Joyce has recorded 6 shutouts in 11 games this season.

“Phallon is a terrific goalkeeper. She has tremendous presence, great hands and wonderful athleticism,” Match Fit Academy Coach Jordan Raper said about Tullis-Joyce, “Phallon was very coachable, loved the game and was very well respected by teammates and opponents alike.”

We wish Phallon Tullis-Joyce the best of luck in this current college season. Thank you for being an Amazing Young Woman.

[SoccerAmerica] 'Developing smarter players: What we should and shouldn't coach at the younger ages -- and why' by Christian Lavers