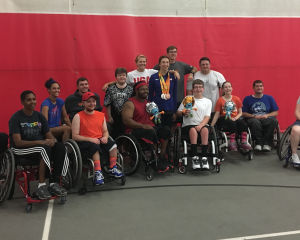 RICHMOND, VA (September 22, 2016)- Alexa Halko has just returned from embarking on a journey as the youngest female athlete on Team USA in the 2016 Paralympic Games in Rio. The 16-year-old, high school junior competed, and medaled, in three track events in the Paralympic games and fulfilled a dream she has had since the tender age of seven.

Halko was diagnosed with cerebral palsy, a neurological disorder that limits coordination, balance and body movement, at 18 months. She qualifies to compete in the T34 Paralympic classification which includes athletes with hypertonia, ataxia and athetosis. She was the only athlete on Team USA who competed in that classification.

Halko’s journey to the Paralympics began when she was introduced to wheelchair basketball by the Greater Oklahoma Disabled Sports Association when she was seven while living in Oklahoma. Once she began playing adaptive sports, the Paralympics was always a part of the conversation. She initially thought she would like to play wheelchair basketball, but once she found wheelchair racing, she fell in love with the sport.

Her favorite thing about wheelchair racing is how fast she gets to go on the track. While Halko can walk, she has difficulty keeping up with peers when it comes to running so being in a wheelchair gives her the freedom to move freely and go as fast as she wants without limits. And once she is on the track, she flies. In fact, while qualifying for the 2016 Paralympics she broke the T34 world record for the 800-meter for the second time.

Halko began wheelchair racing in the Spring of 2008 and it immediately became her favorite. She took it seriously from the beginning and while she was still competing in Field (shotput, discus and javelin), wheelchair basketball and swimming, in 2014 she had to make the decision to focus on one and wheelchair was the clear favorite.

This decision happened around the time she moved to Virginia. Once she was in Virginia she sought out a coach and joined the Paralympic sport club, Sportable. Although her coach, Drew Mearns, had no experience with adaptive sports, he embraced the challenge and took on Halko as an athlete.

She then began to focusing on sprint and middle distance and was finally old enough to apply for a Paralympic License- which states that a person is serious about racing and will follow a set of rules. This also allows for times to posted and ranked with others in the same class around the world. Once she had her Paralympic License, her times caught the eye of the Paralympic Committee and she begin attending camps and races.

Her focus for seven years had been making the Rio Paralympics, and she was not only accomplishing that but setting records on the way. Of course, this amount of success does not come without an extreme amount of hard work and dedication. As Rio approached training took the front seat to everything else. Halko trained twice a day with a swim workout in the morning and track training in the afternoons, while also giving special attention to her nutrition.

Before she knew it, she was off to Rio and was the youngest female competing on Team USA. This would be an experience of a lifetime for anyone, but for Halko, she was realizing her dream at sixteen and wanted to appreciate every moment of her time in Rio.

“While going to the races was definitely part of my favorite experiences while in Rio,” Halko said, “Going to the opening ceremonies and watching the torch being lit was probably the highlight of my life so far.”

While she recalled her extreme nerves before every race, that did not deter her performance in the least. Halko took the bronze in the 100-meter, silver in the 400-meter as well as setting a North American record and silver in the 800-meter. Between events she trained and enjoyed the Athlete Village where she said there was a lot of downtime with the other athletes. They spent that time watching other races and just hanging out.

When asked about participating in the next Paralympic games in Toyko, Halko responded with an enthusiastic “definitely.” She admitted while she could be in college and doesn’t have any idea what she will be doing in four years, she is extremely excited to see what the sport will bring to her in the future.

Before she gets back into training for her next race, she will be heading to the White House for the Team USA ceremony next week. After a small break in training, she will gradually get back into it by training three times a week, returning to full-time training in January. In her “off-season,” she is looking forward to playing wheelchair basketball with Sportable.

Her advice for other Amazing Young Women working toward their goals is to always be open to try new things and work harder than everyone else around you.

Alexa, thank you for sharing your story.  You are an Amazing Young Woman.