RICHMOND, VA (May 19, 2016) – Allison Jorden is a member of the SC del Sol ECNL U17 team, for whom she has been captain the past two years. When she graduates at the end of this month, she will continue her education and soccer career at Indiana University. She is planning on pursuing a business degree, either in finance, or possibly applied mathematics. Jorden is a National Merit finalist, student body vice president, her high school’s Outstanding Student of the Year, a member of the National Honor Society and Spanish Honors Society, and is graduating in the top 5% of her class. She has excelled on the pitch and in the classroom, but we would like to spotlight how she has impacted the community, not only at her high school but around the world.

Jorden has dedicated her time off the field to giving back to her high school’s Best Buddies program. Best Buddies is a nonprofit organization dedicated to establishing a global volunteer movement that creates opportunities for one-to-one friendships, integrated employment and leadership development for people with intellectual and developmental disabilities. Jorden is Vice President of her high school’s chapter, which was named the top club in Arizona last summer. She originally got involved because it was the popular thing to do, but it became much more than that for her; it changed her life. 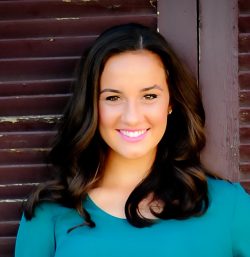 Once she became a part of Best Buddies, she became close with a fellow classmate with disabilities in her gym class. She began hanging out with him and his friends and really enjoyed how genuine and candid they were. These friendships changed the way she saw herself and others. She is inspired by these students daily, fueling the fire within her to give back through volunteer work.

“Everything is so genuine. They do everything because it gives them pleasure,” said Jorden, “They do it for themselves, not because it’s what others want them to do, and I love that.”

Over the past two years she has coached the Unified Track team, a track team comprised of athletes with disabilities, which participates in dual track meets with the varsity team through their season, as well as founding and coaching the Unified Cheer team, which also participates with the varsity team. She recognizes the Unified Cheer team as her biggest accomplishment to date. She is so proud of this program because from start to finish, she has put all her hard-work and energy into it. The faculty advisor was not able to participate, so Jorden ended up running the show herself and really gained the trust of the parents of these kids, which was extremely important to her.  This is a tremendous accomplishment that has made an impact within her community, and will be around for years to come. The legacy she will leave behind makes her proud of the work put in.

Outside of the Best Buddies program, she is also involved in several other organizations in her community including: Celebrate Autism, a non-profit organization that supports individuals with disabilities who want to pursue entrepreneurial careers; Gigi’s Play House, educational and therapeutic programs designed to help children and adults with down syndrome grow socially and developmentally; Be Kind People Project, a non-profit organization that recognizes and thanks teachers for their efforts and stresses the importance of kindness in the classroom; and Barton House Club, a volunteer club which visits and designs gifts for residents at the Barton House, a home for those with memory disorders. She has also organized drives for gently used soccer gear for orphanages located in Latin America.

Another organization that is very important to her, and her ECNL member club, is UMOM which is the largest homeless shelter for families in Arizona. Les Armstrong is the SC del Sol Director of Coaching and ECNL Technical Director, as well as Jorden’s coach.  He introduced the CEO of UMOM to SC Del Sol to provide an opportunity for players to meet and learn from an empowered woman. The club as a whole have been looking to get involved there, resulting in Jorden and some of her teammates reading to the kids at UMOM on multiple occasions.

Jorden’s commitment and involvement in the community, not only affect those in Arizona, but have made a difference around the world. She has made in impact on Les, her teammates, as well as those who have encountered her in varying other degrees.

“Allison is a player that the other players look up to as a leader. She is the glue that holds the team together,” Les said about Jorden, “She is the first to greet new players and welcome them to the team, taking them under her wing and showing them the ropes. She’s the kind of player and leader who will run her shuttle runs then go back and will run with those that are struggling and encourage them”

If you were on an island and could only bring 3 things, what would they be? A friend, solar powered phone, pillow.

If there was a movie produced about your life, who would play you and why? Tina Fey, because I love her and Amy Poehler. I look more like Tina so I would pick her. She is a funny, inspiring woman, and I would be honored to be played by her.

What is your perfect pizza? Thick crust, pesto sauce, cheese, and mushrooms.

What is something that most people don’t know about you? One of my eyebrows is completely uneven, people never notice it but once I point it out they can’t stop seeing it.

If you could trade lives with one person for an entire day who would it be and why? Emma Watson, because who wouldn’t want to be her and all the work she does is so inspiring .

If you could have one superpower, what would it be? Teleportation, so I never have to fly again. I hate the smell of airplanes.

Allison Jorden you are an Amazing Young Woman.  Thank you for sharing your story and good luck as you continue your soccer career.