The Story Behind Abby Ward

RICHMOND, VA (November 11, 2015) – Abby Ward was the “girl with the weird eyes – a waste of space.” She was told, “You are a freak.” She was an easy target for bullies since those that approached her knew she was too shy to counter their attacks.

Abby was measured by things she could not control. Those measurements turned into noise which might have limited her potential. Bravely, she turned the noise into her fuel.

Abby has joined forces with the Elite Clubs National League (ECNL) on their new campaign, “Fuel Your Fire,” sharing her story of a burning ambition to inspire young people through a special gift – her music.

Abby, now 14, was born with Congenital Nystagmus – a rare defect that delays visual maturation and often causes the eyes to shake. At the age of three months, she was placed in the care of the Children’s Hospital in Los Angeles by her parents, Tim and Shelby Ward.

“We were told that she either had a brain tumor or was blind,” said Tim. “We had a 48 hour period where we held our breath.”

“Every doctor that looked at her thought she was doomed,” said Shelby. “But the one doctor that did the test on her had hope.” Fortunately, the final report regarding Abby’s condition was favorable.

“The nurse came out crying but she said she only cries when there is good news,” said Tim, currently in his 18th year as the Head Women’s Soccer Coach at Pepperdine University. “Abby’s eyes were going to work. Her vision is ok now, but not great. She sees the world through her music.”

Tim was an accomplished musician who chose a career in soccer over music. However, he was not the first person to discern the unique abilities of his daughter.

“Tim didn’t think it was odd that she could sing in perfect pitch at the age of 2,” said Shelby, who was forced to take piano lessons by her parents. “Then he started to see it himself. She did this little performance for him when she was six – that’s when we knew it.”

“It was a bit eerie how musical she was,” remarked Tim. “She was humming and harmonizing as a five or six year old.”

Her vocal aptitude was innate but Abby had little yearning to expose her treasure to the outside world – or even inside her own home where a financial bribe was necessary for a fleeting performance.

“She was very, very shy and you would have to give her dollar bills to sing,” said Shelby.

“There was a friend of ours, Angie, and she would pay me two dollars to sing for her,” said Abby, delighted by the memory.

The recollection of her youth, though, was unsettling. Abby was withdrawn – uncomfortable in social settings and still learning to cope with the effects of being hassled because she was different.

“I was not like everyone else in a way,” she explained. “I use to play with imaginary friends. I didn’t play sports because I was scared of getting hit because I couldn’t see. I didn’t like that kind of stuff but every other kid in my grade did and I would get bullied for that.”

“Early on, it was hard,” said Tim. “Kids in second and third grade don’t get it. They would say, ‘what’s wrong with you.’ That ignorance was hurtful.”

In order to cope, Abby wrote in a journal about her issues. She prayed a lot and gained emotional warmth in church. Perhaps most cathartic was composing songs about her experiences.

“She came home from school one day, it was a rough day and she was affected,” said Shelby, a former health and physical education teacher. “We were chatting and she said, wait, hang on, don’t talk – she grabbed her guitar and her phone and pushes the record button. She had a chorus in her head that had to do with how she was feeling. It’s a song named, “A Little Love.” It came straight from the emotion of the day. I was blown away.”

“Abby was born to create,” said her father. “From top to bottom it’s all creativity.”

“Well, I just kind of write and sing what I feel,” said Abby. “Music is my escape – not just an escape but a part of me now.” 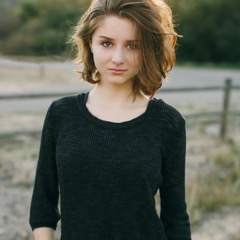 Ramy Antoun and Tim Ward were high school and college comrades. Moreover, they jammed together in a band at Cal State Lutheran University and eventually created an album that received critical acclaim. It was at this juncture that Tim opted to pursue soccer as a profession while Ramy proceeded with music. Ramy, an accomplished drummer, eventually toured with artists like Seal.

Ramy is the CEO and Founder of Creative Arts Group Management and currently manages the careers of artists like Abby – a perfect union for the Ward family, securing representation for their daughter with a great friend.

“I get a lot of calls – 20,000 calls – from parents who believe their daughter can sing,” said Ramy. “You can go on YouTube and see thousands of girls singing songs and they are decent. But there are certain people that come across your desk that are exceptional.”

Abby Ward is one of those elite performers.

“She has an honest presence and is so mature for her age,” said Ramy who suggests that she is in the top one percent of entertainers her age. “Frankly, there is one problem – how do you present music true to who she is when she sounds like she’s 35!”

Sarah Kate Noftsinger quickly pulled to the side of the road and screeched to a halt – she had just heard the opening phrases from Abby’s three-song EP.

“Skate” is the commissioner of the ECNL. She was formerly an Assistant Coach at Stanford and a two-time, All-ACC player at Wake Forest.

“It’s like when you’re recruiting and you see a kid on the field. You immediately pick up the phone and call the head coach,” she said. “I found this special kid, she has an x factor.”

After listening to Abby, Sarah Kate made a prompt call to Abby’s agent, Ramy. “This girl is special,” she told him.

Skate had become friendly with Tim Ward on the recruiting circuit. She would see him regularly at sites across the country. At every event they would strike up a conversation.

Sarah Kate was familiar with Abby’s turbulent childhood and after hearing a voice with lyrics that exuded power, passion and conviction, she recognized a precious connection.

“Abby had her insecurities and music became her outlet,” said Noftsinger. “Like a lot of our girls, soccer is their outlet.”

Consequently, Skate asked Abby if she would be interested in scripting a song for the “Fuel Your Fire” campaign. The request was made on a Friday. By the following Tuesday, Abby had delivered a finished product, “Fire”.

“That’s the first time I have written a song under pressure,” said Abby.

“She said, what do you think of the lyrics,” said Sarah Kate. “I was blown away – in four and a half days, she writes this powerful song.”

“I definitely see the connection between me and the girls in ECNL,” continued Abby. “While writing the song, I pictured a girl in the World Cup or an Olympic athlete holding up a torch with the fire. She is exuding confidence.”

“She has the ability to channel a deeper emotion to write songs that are really honest,” said Ramy.

“I played it for my 10 year old niece,” said Sarah Kate. “She said, Taylor Swift better watch out – she’s going to be a star.”

For Abby, she is less attracted by fame and more by the pursuit of her passion to share words of encouragement through her music – a positivity enthusiast as she likes to call herself.

“Everyone around me says, you are going to be famous,” said Abby, who still suffers from social anxieties in person – but no longer on stage. “I want to be more than just a singer-songwriter. I want to be able to inspire girls and boys to just be who they are.”

“She’s going to appeal to a lot of teenage girls,” said Tim, who coaches a U-9 team with Real So Cal, an ECNL club. The parents from the team all brought their daughters to one of Abby’s shows.

“She can play an hour set of original songs,” said Tim with pride. “She just writes a lot – just constantly creating.”

Abby recently started her own campaign called Indiegogo.com. She has a goal to raise $50,000 in order to provide the opportunity to travel, develop her song-writing skills and produce her first album.

“She has a message,” said Shelby. “She stands for anti-bullying.”

“I’m more confident in myself now, more strong in my head,” said Abby, who has presented at high profile venues in Los Angeles including the House of Blues and Hotel Café. “I can be who I want to be and not worry about things.”

“When you are trying to become the best at something, there are always naysayers trying to hold you back,’’ said Sarah Kate, the ECNL commissioner. “We want our players to be like Abby – take that negative noise and turn it into fuel. It should never drive you back, but push you forward.”

Support ECNL’s own Abby Ward by downloading “Fire” on iTunes, or by supporting Abby’s Indiegogo Campaign.