RICHMOND, VA (October 26, 2015) – At home in Northern Virginia, Lauren Harkes grew up with a backyard that featured some not-so-ordinary competitions between kin.

Consider the players in these 2 v 2 plus 1 or 3 v 2 soccer scenarios:  Former U.S. Men’s National Team Player, two-time MLS Cup Champion and Hermann Trophy winner at the University of Virginia, John Harkes; his wife, Cindi Harkes, a former U-19 National Team member and three-time All-ACC selection while at UVA;  Ian Harkes, a junior, starting in the midfield for the No. 2 team in the country, Wake Forest University; Lily Harkes, a sophomore midfielder starting for Bishop O’Connell High School; and Lauren, playing in the center of the park as a freshman at Clemson University, presently No. 6 in the nation.

“Oh yeah, we competed in the backyard,” said Lauren with a chuckle. “It was random, I guess. Sometimes we would play girls versus boys and sometimes we’d mix it up.”

That same backyard was often used as a training ground where Lauren and her siblings developed skills and acumen with a pair of experienced coaches – their parents.

“They would always say, if you want to work on something, just say it,” explained Lauren. “Dad and mom would take me out individually and do some drills.”

John, the first American to play in the English Premier League with Sheffield Wednesday, was recently named Director of Soccer and Head Coach for FC Cincinnati of the USL, a partner with MLS.

Cindi, who traveled to England with John in the ‘90’s and competed on the Sheffield Wednesday Ladies, is the former Director of Coaching at FC Virginia and current Age Group Director at the McLean Youth Soccer Club. She also coaches the U-17 ECNL entry and assists the ECNL U-16 side where her youngest, Lily, is an attacking midfielder.

“They never pressured us, but they were always there for us,” said Lauren.

“Cindi and I have both been very careful not to push our kids on it (soccer),” said John, the former captain of the USMNT who played in two World Cups. “We encouraged them to play different sports. We didn’t want to shove it down their throats.”

“Lauren’s path was unique,” said Cindi who played in the 1991 Final Four with UVA. “Of the three kids, she wanted to try everything before she decided what she wanted to do. I think if we had pushed and said you have to play soccer, she would have been the one to rebel.”

Even her numerical uniform choices reflect an independent character. While her brother and sister chose No. 16, the aggregate of their mother’s (10) and father’s (6) jersey numbers, Lauren opted to wear No. 10 for a time and currently dons the No. 6 for the Clemson Tigers.

For Lauren, soccer became her unconditional passion, but there was a spell when she had a ripe curiosity about alternative athletic endeavors.

“Around 11 or 12 years old, I had a desire to branch out. I had gotten into a routine of soccer, soccer, soccer and wanted to try something different,” said Lauren who tinkered with swimming, basketball, lacrosse, tennis and horseback riding.” Soccer was my favorite sport, though. Soccer is the one I loved the most. It has always been a part of everything for us.”

One would not be astonished to discover that in the Harkes’ household, the television is tuned incessantly to Serie A, Champions League, EPL, La Liga, MLS or USL. The girls all support Barcelona. Ian prefers Liverpool and John favors Arsenal, a one-time arch rival to Sheffield Wednesday. Ironically, the Owls will host Arsenal in the fourth round of the Capital One Cup tie on Tuesday, October 27.

“Of course, the Owls,” answered the elder Harkes when asked who he prefers. “Next question!”

While Lauren can remember seeing her father play for DC United in MLS, the favorite memory of her dad on the pitch comes from the Harkes’ video archives where John made history in Great Britain where Lauren’s brother, Ian, was born.

“It’s when he got “Goal of the Year” in England for Sheffield Wednesday,” said the middle offspring with great pride in her voice. “He showed me that clip and it was amazing. I said, ‘What – you did that?’” 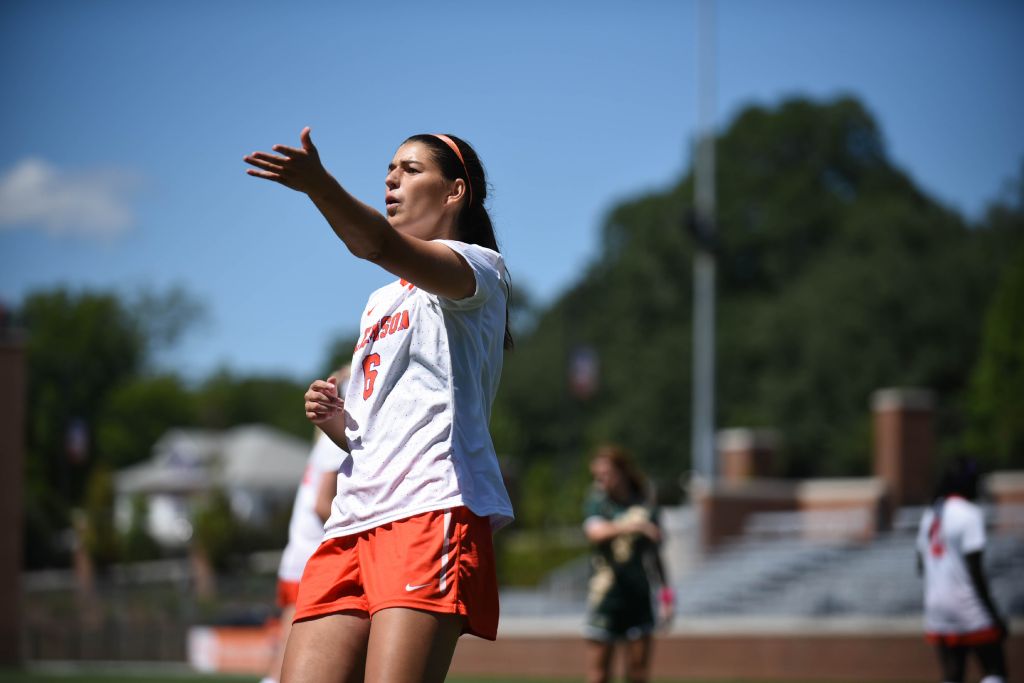 Entering her freshman year in high school, Lauren had clearly decided to put all her athletic efforts into soccer.

“You could see it kick in,” said John. “She recognized what it took and the commitment level and how competitive it was going to be.”

“Everything got more serious,” she said. “I was playing on an ECNL team which was a higher level of play.”

“It was hard,” continued her father. “Playing in the ECNL for McLean really helped. With all these tournaments, you learn how to manage yourself and your time – when to do the academics and when to enjoy life as a kid.”

At McLean, Lauren played a vital role for a club team that has had regular success in the ECNL under coach Nadir Moumen and Director of Coaching, Clyde Watson.

“On the ECNL level, the player asks, ‘is this the path that I want to do,” said John. “They learn to understand the sacrifice.”

At Bishop O’Connell, Lauren excelled in both the academic and soccer environs. Lauren was captain and First Team All-Met in her junior and senior seasons. She also helped O’Connell to four consecutive WCAC Championship appearances.

In her final high school season, Lauren had an inimitable experience – the first instance of playing on the same team as her freshman sister, Lily, a Junior Olympic swimmer in middle school.

“It was really fun and she was playing every game as much as I was,” said the older sister. “We were pretty much in the midfield together – we would knock it back and forth, it was a pretty good combo.”

Observing his daughters grow together as teammates provided warm memories for John who played soccer as a freshman at Kearny High School in New Jersey with his brother, Jimmy, a senior.

It was 1982 and they won a state championship together – and like daughter, Lauren, Papa John assisted Kearny to four consecutive state title matches.

Lauren and Cindi Harkes were both racing home from school (Cindi teaches at Bishop O’Connell’s rival, Paul VI which defeated O’Connell for the first time in 16 years this fall). It was the spring of 2013 and they had a flight for an unofficial visit to Clemson.

“We were literally running through the airport and the plane was pulling out,” said Lauren. “So we went back home, packed the car and drove instead.”

After the eight hour drive through the night, the weary pair pulled into a hotel at 4am and got a brief snooze before their 8am meeting with head coach, Eddie Radwanski.

“It was a hectic trip,” said Lauren, who admitted that she sought an experience that differed from her parents. “But it was worth it.”

“I was trying to do my own thing, what fits for me,” continued Lauren, who included Virginia and Wake Forest among her final three. “I guess make a name for myself.”

“Our kids want to be known as themselves,” said Cindi. “We really tried to raise them not to have to live under that shadow of expectation.”

“It’s not like it was a burden,” explained Lauren. “I’m proud of my parents.”

“She was just so happy on our ride home,” said Cindi, whose bed is still adorned with a UVA blanket. “I knew she wanted to go to Clemson but it’s bittersweet. The UVA game will always be a tough one to watch.”

Lauren, who had started two matches and scored a goal in her collegiate debut, was sidelined with shin splints. Regardless, her college coach has high expectations for a young player who fits the Clemson profile.

“I was banking on her DNA,” suggested Radwanski who was John’s teammate at the Olympic Sports Festival in the mid ‘80’s – where John and Cindi, who was playing on the women’s side, first met.

“I saw Lauren’s confidence grow in her last year of high school,” said Radwanski, in his fifth season with the Tigers. “And I could see some of her natural instincts coming out.”

“She is cerebral and picks her moments very well,” said John, who proudly observed her first career tally against the College of Charleston. “She just picked her time, followed up on a rebound and tucked it away.”

“I could see it building up,” said Lauren while examining the play. “I made my way into the box and thought, ‘maybe I can get on the end of this.”

The finish was pure, in the mold of a striker. Regardless, Lauren and her two siblings relish their roles in the center of midfield, akin to their father.

Cindi was a striker and is confounded that none of the three have followed in her No. 9 foot- steps.

“I don’t get it,” kidded Cindi, who was a three-time All-Met scholastic player pumping in goals at WT Woodson High School. “I tell them, don’t you want to poach and score goals like me!”

At the moment, Lauren believes her strengths reveal that she functions best as a central midfielder.

“I like to keep the ball and I’m a good passer,” she said when asked for a self-evaluation. “I like to win balls in the air and I’m pretty good at getting into tackles and disrupting the midfield.”

“She will go into a tackle, she doesn’t care,” exclaimed her mom.

“She’s tough on the tackle,” remarked her dad.

“She has the qualities that are going to help us over the next few years,” said Radwanski.

For now, Lauren rubs ice on her shins daily in the hope that the pain will subside while she closely monitors the paths of her brother and sister.

Secretly, Lauren hopes that Lily will one day join her in South Carolina with this proviso:

Lauren, you are an Amazing Young Woman.  Thank you for sharing your story.