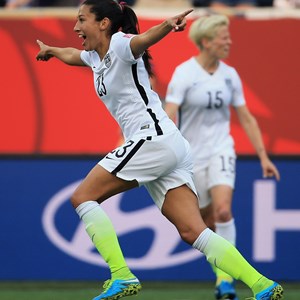 Soccer League (NWSL) Chicago Red Stars, Christen has used her global presence in soccer to help improve the lives of some of the world’s most in-need youth populations.  Christen exemplifies how being at the top of your game in soccer can lead to achievements far beyond your own playing field.

Since 2014, Christen has been an athlete ambassador for Grassroots Soccer, a charitable organization that uses the power of soccer to educate, inspire, and mobilize in the fight to stop the spread of HIV.

“The tremendous honor of playing on the world stage is even more rewarding when I am able to use my accomplishments to help others,” said Christen.  “Being a part of Grassroots Soccer is an important part of how I continue to push myself to be the best I can be – it doesn’t stop on the field.  I encourage all players to work to be their best, which includes looking for opportunities beyond the playing field.”

Founded in 2002 by athletes playing soccer professionally in Zimbabwe, they witnessed first-hand both the devastation of HIV and the tremendous popularity of soccer.  Harnessing the communicative power of the beautiful game, Grassroots Soccer works to reach young people in a language they understand and respond to – soccer.  In her role, Christen focuses on the girls’ program bringing new hope, pride, and direction to young women who may have been lost.

As part of Amazing Young WomenTM and the #BeautifulAmbition campaign, the ECNL is sharing the stories of S’Heroes who are role models for our nation’s young female athletes who are balancing their drive to become elite athletes with the pressures of fitting in with social peers.

Christen grew up in Southern California, beginning her soccer career at the age of five.  She played youth club soccer for Slammers FC, a current ECNL Member Club, leading them to a national championship and earning the golden boot award.

“Christen was the first player at practice, and the last one to leave.” said Ziad Khoury, ECNL Coach for Slammers FC. “She gave her all in every drill and every game, and wanted to score every time she stepped onto the field.  Christen raised the level and brought the best out of everyone around her by setting the example.  I am so proud to call her an alum, and to follow her as she continues to live her dream.”

After a decorated youth career she went on to play collegiately at Stanford University, where she currently ranks as the All-Time Leader in goals (71), assists (41), and points (183).  Christen was the 2010 Herman Trophy Winner, Pac-10 Player of the Year, Pac-10 Scholar Athlete of the Year, and NSCAA All-American, among other honors.

“Christen was an absolute joy to coach at Stanford.” said Paul Ratcliffe, Head Women’s Soccer Coach at Stanford University. “She was a great teammate and a fantastic ambassador to our program.  Christen is a very intelligent person with great perspective on how soccer can play a positive role in the development of young women.  She is an outstanding role model for young people, and I look forward to seeing what she achieves next.”

In 2011, Christen was drafted as the fourth overall pick in the Women’s Professional Soccer (WPS) to the Washington Spirit (renamed magicJack when relocated).  In 2012, the WPS suspended operations and Christen signed with Kopparbergs/Goteborg FC in Sweden.  After one year she inked a contract with Tyreso FF, the top team in the Swedish Damallsvenskan league, where she continued her successes.

Christen moved back to the U.S. in 2014 and was signed by the Chicago Red Stars where she went on to be the teams’ leading scorer in her first season, earned her way into the U.S. Women’s National Team, and became involved with Grassroots Soccer.

Christen — like all of the S’Heroes Award recipients — recognizes that as a professional athlete, she has the ability to influence and instill positive change in the world.  Her ability to balance this passion with the rigors of being an elite athlete epitomizes what it means to be an Amazing Young Women.

S’Hero Awards is part of the Amazing Young WomenTM campaign designed to showcase strong, successful women who embody the leadership ideals first learned and developed on the soccer fields of their youth.  Through the awards, the ECNL is sharing stories, unifying women of all ages, and celebrating today’s young women as they prepare to become tomorrow’s leaders.   The ECNL is calling on all who love sports to join them in supporting youth female athletes as they recognize their own potential, define their individual paths to success, and prepare to be our next generation of leaders by visiting www.AmazingYoungWomen.com and using the hashtag #BeautifulAmbition.

Studies have shown that driving factors behind girls dropping out of sports include social stigma and limited exposure to the inspirational journeys trail blazed by positive role models.  Too often player traits that are so valued by teams are not promoted as “beautiful” traits for young girls.  By age 14, girls are dropping out of sports at two times the rate of boys.  Amazing Young Women encourages young female athletes to embrace their ambitious, driven and competitive nature.  And those recognized as S’Heroes have taken a spirit of leadership and inspiration from the field, and have demonstrated that it’s not just about a phase of your life, but a way of life.