RICHMOND, VA (June 9, 2015) – The Elite Clubs National League (ECNL) today announced Julie Foudy and Madeline Steinmetz as the May S’Hero of the Month award recipients for individual and community leadership.  As part of the Amazing Young WomenTM campaign, S’Heroes highlights and celebrates top female role models and is creating an aspirational line-up of women to motivate and inspire our nation’s young female athletes.  Each month the ECNL selects new S’Heroes to demonstrate that being a driven young woman is beautiful, and to support young women who are balancing their ambition to become elite athletes with the pressures of fitting in with social peers. 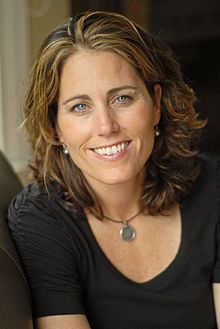 S’HERO OF THE MONTH – JULIE FOUDY

Julie Foudy is the current women’s soccer and FIFA World Cup analyst for ESPN and Co-Founder of the Julie Foudy Sports Leadership Academy (JFSLA), which launched in 2006.  Her passion to teach young girls the values of leadership both on and off the field led her and her four counterparts to creating the JFSLA.

Julie grew up in Southern California, earning accolades as one of the top soccer players to ever come out of the region.  She continued her soccer career at Stanford University, where she balanced athletic and academic acumen.  She was ultimately accepted into the prestigious Stanford Medical School program which she deferred for two years and ultimately decided to not pursue as she continued to focus on her professional soccer career which has helped pave a new path and inspiration for millions of youth female soccer players.  Julie followed her love of the game and continued to play professionally for Tyreso FF (Sweden) and the San Diego Spirit (WUSA).

Julie is a former U.S. Women’s National Team Member, representing our country for 17 years during a pivotal era in women’s soccer.  Her debut with the national team began in 1987, and continued until her retirement in 2004, where she played alongside fellow S’Hero recipient Mia Hamm.  Julie captained the team her last four years, ending with 272 caps for the red, white, and blue.

During her career, she helped the USWNT earn two World Cup titles (1991, 1999), two Olympic gold medals (1996, 2004), and one Olympic silver medal (2000).  Julie was an integral part of the women’s soccer movement, playing with one of the most successful teams – in any sport — to date.  In 2007, she was inducted into the National Soccer Hall of Fame as part of the first all-female class of inductees.

Julie is also a former Women’s Sports Foundation President, a nonprofit organization started to advance the lives of girls and young women through sport and physical activity.  She is an advocate for women and children’s rights, having received the FIFA Fair Play Award for her overseas trip to Pakistan to take an inside look at working conditions within Reebok factories.

“Live. Lead. Pass it on! This is the motto I have lived by and what I hope to imprint on others.  It’s not just about being your best, but also about making a difference along that way – that is what true leadership is about.” said Foudy.  “The game of soccer has given me so many opportunities to impact others, and being named a S’Hero truly captures the best of soccer for me.  It is my life goal to give back to the sport I love and the young women within it.  Being able to play a part in motivating the next generation of female leaders through sport is the ultimate win.”

Madeline “Maddie” Steinmetz is a member of the Penn Fusion ECNL U17 team and current senior at East High School in West Chester, PA.  She is committed to attend Rensselaer Polytechnic Institute in the fall, where she will study architecture and continue her soccer career.

On the field, Maddie is a 9-year veteran and original member of her club team.  In addition to her team’s training, she has assisted with the junior soccer program within Penn Fusion Soccer Academy, mentoring young girls through the sport she loves.  And her leadership extends far beyond the goal line:

Maddie manages a tough academic schedule and participates in numerous volunteer opportunities within her community.  She is part of Project AWARE assisting in the stewardship of our oceans and coral reefs through scuba diving efforts, and she has spent four years as a peer-mentor as part of the Best Buddies program for students with disabilities.

Her most ambitious project had a direct impact on the lives of young children whose families relied on a local after school program to provide healthy snacks, interactive playtime and homework assistance in a safe and nurturing environment.  Desperately in need of upgrading and financial assistance to accommodate the growing numbers of students, Maddie developed a business plan after meeting with community center administrative staff and identifying student and teacher needs.

“The completion of the Melton Community Center Project was one of my proudest moments to date.” said Steinmetz.  “The Community Center holds a special place in my heart.  The ability to effect positive change on others is something that fuels me to keep giving.  This project helped me realize that I could build awareness and make meaningful change, and in turn improve the lives of children within the community.”

S’Hero Awards is part of the Amazing Young WomenTM campaign designed to showcase strong, successful women who embody the leadership ideals first learned and developed on the soccer fields of their youth.  Through the awards, the ECNL is sharing stories, unifying women of all ages, and celebrating today’s young women as they prepare to become tomorrow’s leaders.   The ECNL is calling on all who love sports to join them in supporting youth female athletes as they recognize their own potential, define their individual paths to success, and prepare to be our next generation of leaders by visiting www.AmazingYoungWomen.com and using the hashtag #BeautifulAmbition.

Studies have shown that driving factors behind girls dropping out of sports include social stigma and limited exposure to the inspirational journeys trailblazed by positive role models.  Too often player traits that are so valued by teams are not promoted as “beautiful” traits for young girls.  By age 14, girls are dropping out of sports at two times the rate of boys.  Amazing Young Women encourages young female athletes to embrace their ambitious, driven and competitive nature.  And those recognized as S’Heroes have taken a spirit of leadership and inspiration from the field, and have demonstrated that it’s not just about a phase of your life, but a way of life.