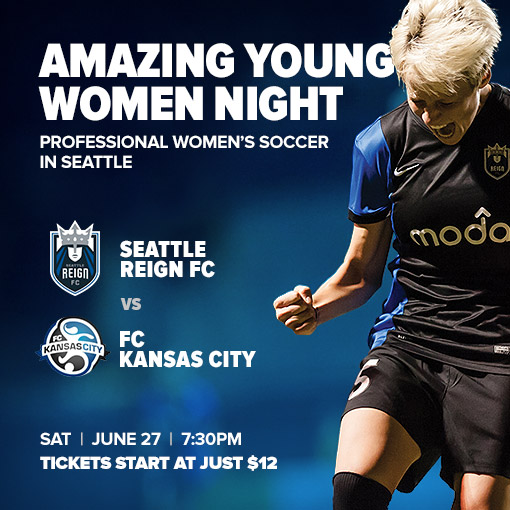 RICHMOND, VA (May 18, 2015) – The Elite Clubs National League (ECNL) is teaming with Nike and Seattle Reign FC of the National Womenâ’s Soccer League (NWSL) to recognize top female athletes that are hitting the soccer pitch to compete at the highest caliber among the world, U.S. national, and youth levels.

The ECNL’s Amazing Young Women campaign honors leading female athletes for what they represent to the next generation. Through the program, the ECNL shares stories of amazing young women that exemplify what it means to have #BeautifulAmbition, and is calling on all women to join the movement to celebrate the power of what is to be a girl today.

As an extension of the ECNL’s Amazing Young Women campaign, Seattle Reign FC is offering all ECNL playoff teams an exclusive ticket offer to attend the Seattle Reign FC vs FC Kansas City match on Saturday, June 27th at 7:30PM PT on Moda Pitch at Memorial Stadium, which is located in the shadow of the Space Needle next to Seattle Center.

“The ECNL is devoted to improving the overall player experience and raising the game.” said Sarah Kate Noftsinger, ECNL Commissioner. “The Amazing Young Women campaign allows us to celebrate the leaders of today, and raise awareness of the opportunities each young woman has in front of them.  Partnering with Nike and Seattle Reign FC will further spread the message and provide a unique experience to our players, family and fans.”

“We are very pleased to partner with ECNL for the second consecutive year.” said Seattle Reign FC head coach Laura Harvey. “This relationship provides NWSL players of the future the opportunity to watch and engage with the NWSL athletes of today.”

The ECNL partnership extension with Seattle Reign FC is taking place during the rematch of the historic 2014 NWSL Finals, when Seattle Reign FC takes on FC Kansas City, and coincides with two other top competitions:

ECNL Playoffs, the largest ECNL event of the season with the top 224 teams, and featuring some of the most intense rivalries in the country.

Now is the time to celebrate and unify all of our Amazing Young Women.

About Seattle Reign FC: Seattle Reign FC is one of nine teams in the National Women’s Soccer League. The NWSL is supported by the Canadian Soccer Association, Federation of Mexican Football and the United States Soccer Federation. The NWSL is the premier women’s professional soccer league in North America, featuring many of the top players from the United States, Canada and Mexico, as well as talent from around the world. Seattle Reign FC train and host home matches at Memorial Stadium, located in the shadow of the Space Needle next to the Seattle Center. For more information on the club visitÂ www.ReignFC.comÂ or call 855-REIGNFC.

About Elite Clubs National League: The Elite Clubs National League (ECNL) was founded in 2009 to enhance the developmental experience of female youth soccer players in the United States through: (i) Improving the competitive environment through creation of a true national competitive league; (ii) Improving the process for identifying elite female soccer players for the U.S. Soccer youth national teams through a systematic scouting and identification program based on national competitions; and (iii) improving the daily training environment at top female youth soccer clubs through developing best practices and training and organizational guidelines for its member clubs.Â  The ECNL is sanctioned by US Club Soccer and is sponsored by Nike Soccer.