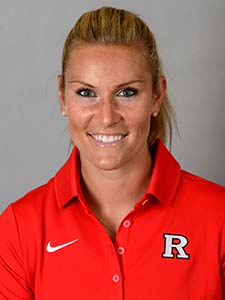 RICHMOND, Va. (October 29, 2014) – Meg Ryan is a native of Annapolis, Maryland where she grew up playing the beautiful game of soccer.  She excelled on and off the field, playing club for the Bethesda Dragons, a current ECNL Member Club.

Meg experienced ups and downs in her soccer career, using both the good and the bad to learn and propel herself to where she is today.  While playing club with Bethesda, Meg helped her team to two Regional Championships and to the National Championship game where they finished second in the country.  Not only did she reach the top level as a club player, she is now coaching at the top level for one of the best clubs in the country.

Meg continued her soccer career at Rutgers University, where she gained one of her fondest memories as a player.   After two ACL reconstructions, the odds were stacked against her.  Many had their doubts on whether or not she could play at this level, including Meg herself.  Through hard work and commitment Meg worked herself from an injured reserve to clocking minutes for the Scarlet Knights in a critical match.

Meg was called in to replace an injured center back, a high-pressure position, with fifteen minutes left on the clock against the University of Florida.  It took dedication and courage, but Meg earned her time and she was ready.  She played with her heart on her sleeve and with the belief that she would conquer this challenge, and she did.

It was this turning point where Meg took a leap, never doubting she could compete at a high level and never looking back.  It is this same attitude she lives by in her coaching career.  Meg is the current Associate Head Coach at Rutgers University and ECNL Coach for PDA, the Overall Club Champion two years running.

Meg helped coach the PDA Slammers to three National Titles, alongside fellow Rutgers Coach Mike O’Neill.  The atmosphere at PDA is unmatched; their winning record speaks for itself.  But PDA is not just about wins, they build character and this is where Meg thrives.

In three words Meg defines PDA as “Family, Character, Talent”.  Meg values each conversation and action she has with her players, knowing the impression made can mold them for better or worse.  It motivates her to be a good role model and help develop young girls to be their best every day, on and off the field.

As Meg continues her prestigious coaching career, she aspires to be a Head Coach at the Division I level.  The passion Meg has for the game motivates her to keep setting goals and raising the bar.  When asked what words of wisdom she would pass on to the next generation of women soccer players, Meg said “Follow your heart and do the best you can, and always work to be the best person and player you can be.  Cherish and make the most of every opportunity that you get!”  Meg is a true inspiration and leader when it comes to making the most of any situation.

Meg, you are an Amazing Young Woman.  Thank you for sharing your story.

THE ECNL COLLEGE IMPACT-- THE SEC