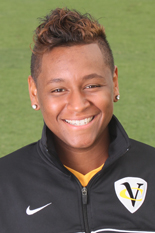 RICHMOND, Va. (October 22, 2014) – Lauryn Hutchinson is a current member of the Trinidad & Tobago Women’s National Team, currently competing in the CONCACAF World Cup Qualifiers.  This is her second time competing on the national stage for Trinidad & Tobago.  Lauryn is a Virginia Commonwealth University Women’s Soccer Alum, where she played four years.  She obtained a Bachelors of Science in Psychology and a Masters of Education in Sport Leadership.  Lauryn started “Find Your Passion”, an organization, in 2011 to inspire others to follow and reach their dreams.  She also helped the Richmond United ECNL U23 team win the 2014 National Championship this past summer.

Q: How was your experience with the Richmond United ECNL U23 team?
A: When I knew I had to prepare for the CONCACAF tournament I wanted to play for a competitive and respected team in the Richmond area. I was welcomed with open arms by head coach Rob Ukrop, assistant coach Peter Nash and the rest of the team.  Each high level training session helped raise my level and prepare me for the journey I am currently on.  It was a great experience.

Q:  What was your favorite memory from this past ECNL season?
A: Besides winning the U23 ECNL National title, my favorite moment with the team was when we tied up the game in the finals against McLean. This was the most memorable moment because we never gave up fighting.

Q: What is your favorite lunch destination?
A:  No-brainer…Chipotle!

Q: When were you first invited to the Trinidad & Tobago National Team Camp?
A: The first time I was invited to a T&T camp was fall of 2011, during my Junior year at VCU. I left at the beginning of August to join the team for the Pan American Games.

Q:  How was it playing against the US Women’s National Team in the CONCACAF Qualifiers?
A:  I could probably write a book, but I will try to keep it short. Stepping on the field with some of the best soccer players in the world was the most exhilarating feeling I have ever felt. In the tunnel before going out on the field, Abby Wambach was cracking jokes to ease the tension. Once we were on the field all I did was soak up any knowledge I could from them. The way they interacted with each other, the way they spoke and carried themselves was inspiring. They are truly world-class athletes.

Q:  Who is your soccer idol?
A: Tiffany Roberts Sahaydak is my soccer idol. She is exactly what I want to be in the soccer world and in life in general. She exemplifies what it means to be a mother, a wife, a friend, and a player at the highest level in the world. She has taught me so much about life on and off the soccer field.

Q:  What is something that most people do not know about you?
A: I am absolutely in love with going to Ballets and Operas.

Q:  Do you have any siblings?
A: Yes I have one brother who is 15 years old. People mix us up all the time, HA!

Q:  If you could fly anywhere in the world, where would you go?
A: This past spring I visited Europe with my masters program and completely fell in love with Germany. I absolutely love the people, food, language and intriguing culture.

Q: What is your favorite quote?
A: “Be the change you want to see in the world” by Gandhi. I think this is extremely powerful and moving. I have this quote by tattooed on my inner left arm.

Q:  How old were you when you started playing soccer?
A: Five years old

Q: If you were stranded on an island, what one thing would you bring with you?
A: I would have to bring an iPhone with a never ending battery

Q: Neymar or Christiano Ronaldo?
A: I would defiantly say Neymar! Not just from a soccer standpoint but also from a fashion and hairstyle standpoint.

Q: If you could have one super power, what would you chose and why?
A: I would love to be able to fly! I could pretty much go anywhere I want, whenever I want!

Q: Do you have a pregame routine/superstitions that you follow?  If so, what are they?
A: No, but I always listen to music and dance around! That always gets me ready for a game.

Lauryn, you are an Amazing Young Woman.  Thank you for sharing your story.

THE ECNL COLLEGE IMPACT-- THE ACC