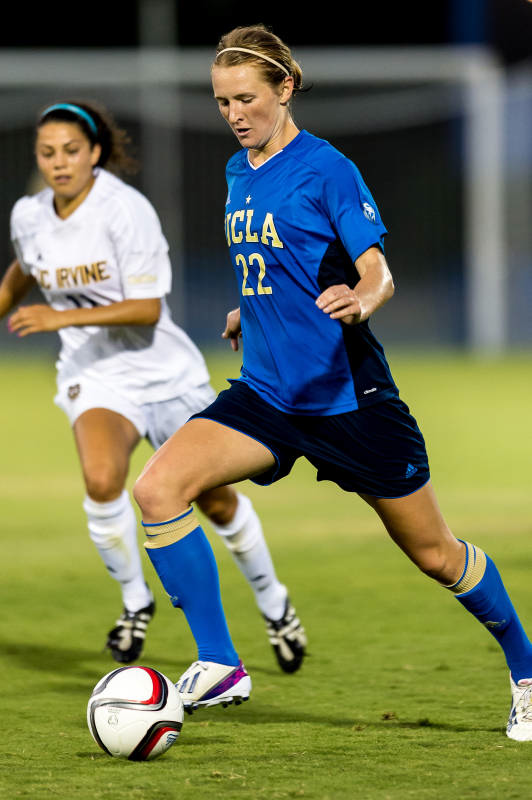 RICHMOND, VA (September 16, 2014) – Samantha “Sam” Mewis is currently a senior at UCLA, playing her final season with the Bruins.  She is an important part of the UCLA midfield, having notched the game winning goal over Wake Forest this past weekend.  Currently ranked No. 1, the UCLA Women’s Soccer Team has held the top spot since the beginning of this season and looks to stay as they hit the road to take on Texas this Friday, September 19.

Sam is an ECNL Alum, having played for Scorpions SC (now Boston Breakers Academy). She was a two-time Gatorade Player of the Year, and ranked the #1 recruit in the class of 2011.  In her college career she has played in over 63 games, scoring 15 goals and racking up 19 assists.  Sam was a member of the NCAA National Championship team last season, playing every minute of the 1-0 overtime victory over Florida State University, marking the first time in school history that Women’s Soccer won the title.

Sam made history yet again with her sister Kristie, when the two became just the second pair of sisters to play together for the US Women’s National Team.  Both were familiar faces within the US Youth National Team organization, including a gold medal for Sam from the 2012 FIFA U20 World Cup.  Sister Kristie is a current member of the Boston Breakers in the NWSL.

Sam, thank you for being an Amazing Young Woman.  #ECNLAYW

The Elite Clubs National League, Inc. (ECNL) is a 501(c) (3) non-profit member-based organization founded in 2009 to enhance the developmental experience of female youth soccer players in the United States. ECNL’s mission is to improve the competitive environment through creation of a true national competitive league, to improve the process for identifying elite female soccer players for the U.S. Soccer youth national teams, and to improve the daily training environment at top female youth soccer clubs through the development of best practices for its member clubs. The ECNL is sponsored by Nike. The National Guard is the official military branch of the ECNL. For more information, please visit http://www.ecnlgirls.com or follow ECNL on Twitter,@theECNL.

INSIDE THE ECNL | MEMBER NEWSLETTER

Weekend Preview: Off to the Races