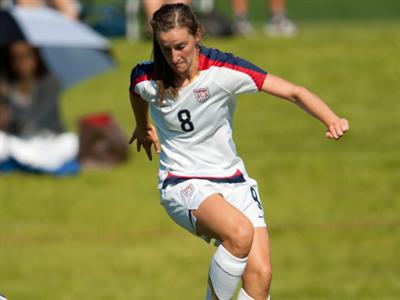 RICHMOND, VA (December 12, 2012): Andi ‘Sunny’ Sullivan, Bethesda Soccer Club’s U 17 & U 18 ECNL player and Got Soccer Ranked #1 overall recruit for the class of 2014 is dedicated to the game of soccer. Driving the DC beltway rush hour traffic from her home in Lorton, Virginia can take up to 3 hours roundtrip to the WJ training venue in Bethesda, Maryland. While missing things like high school parties and friends, Andi has had life experiences that some can only dream of; playing Bethesda Elite Soccer and the U 17 Women’s National World Cup in Azerbaijan.

Sullivan is not a new comer to the intense training of the National Team where she was first called up at U15 and now U17. “It is a competitive dynamic, since you are always unsure whether you will be called up, placed on development or the world cup team,” explained Sullivan,” I have lifelong loyal friends that wanted to kill me on the field and hug me off the field!”

Her club team is supportive of endeavors and was thrilled about the World Cup Game. Sullivan missed quite a few Bethesda ECNL games last season but her teammates did not complain and filled in the gaps.

Sullivan’s Bethesda SC experience has helped her gain exposure, first guest playing on its premier teams and then full roster.  Also, she was technically prepared because of Bethesda’s strong emphasis on technical soccer training.  Sullivan also credits ECNL for getting her identified and prepared to start on the National team. At Nationals, she realized that not all of the players come from the same level of ability or coaching access.

Director of Coaching Girls, Ellis Pierre, has been a great liaison, guiding Sullivan through her college decision, where to play and her next steps. Sullivan has committed to play at reigning College Cup Champion Stanford University in fall of 2014, where she will bring her diverse display of talents to the West Coast.

Coach Pierre consistently challenges the ECNL team to play to their full potential and push everyone to do their best. “Andi has been a real leader to our ECNL and our younger girls teams coming back to Bethesda and sharing her experiences”, explained Coach Pierre, “this helps drive everyone to work hard and get better.”  Sullivan currently plays for both the U17 team and the U18 tournament team.

“My dream is to play for the Full National Team, just like Abby Wambach or Alex Morgan. Driving 3 hours or missing school, it is all worth it in the long run. It is all about loving it, having a passion. It is not for everyone. It is through hard work and a lot of time.” cheerfully explained, Andi ‘Sunny’ Sullivan.

About the ECNL: The Elite Clubs National League (ECNL) is a registered 501(c)3 tax-exempt, non- profit organization. The ECNL was founded in 2009 to enhance the developmental experience of female youth soccer players in the United States through: (i) Improving the competitive environment through creation of a true national competitive league; (ii) Improving the process for identifying elite female soccer players for the U.S. Soccer youth national teams through a systematic scouting and identification program based on national competitions; and (iii) improving the daily training environment at top female youth soccer clubs through developing best practices and training and organizational guidelines for its member clubs. The ECNL is sanctioned by US Club Soccer and is sponsored by Nike Soccer.

About Bethesda Soccer Club: Bethesda Soccer Club is a Premier Travel and Youth Development Program based in Montgomery County, Maryland, outside Washington DC, with over 30 years of soccer excellence. Bethesda Soccer Club started as three teams in 1979, competing as the Bethesda Boys Club. Today, they have over 60 boys’ and girls’ teams from ages U-8 through U-19 that compete in various leagues in Maryland, Virginia and Region I.  The Club philosophy is to develop our players so that they are prepared to compete at the next level.