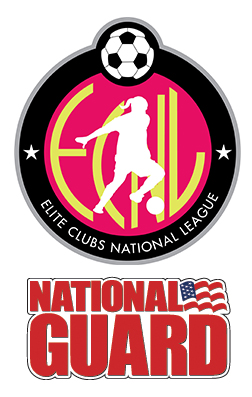 “ECNL provides the National Guard with a tremendous opportunity to reach high caliber female soccer players,” SFC David Therrell said. “This partnership gives ARNG the ability to inform these players about benefits and opportunities that can help prepare them for their futures.”

The Army National Guard is the oldest component of the U.S. Armed Forces, with units dating back to 1636. During local emergencies, Guard units assist residents endangered by storms, floods, fires and other disasters. Guard units deployed overseas may see combat, but are often found building schools and hospitals, training local peacekeepers or teaching local farmers more efficient techniques and better uses of their land. The incredible versatility of the National Guard enables its troops to respond to domestic emergencies, combat missions, counterdrug efforts, reconstruction missions and more—all with equal speed, strength and efficiency.

“We are honored to be working with the Army National Guard and to have their support in providing opportunity for female players in the ECNL” said ECNL Commissioner Sarah Kate Noftsinger. “The Army National Guard’s focus on developing leaders with high personal character aligns with the goal of competitive athletics to serve as a platform for personal development.”

About the ECNL: The Elite Clubs National League (ECNL) is a registered 501(c)3 tax-exempt, non-profit organization. The ECNL was founded in 2009 to enhance the developmental experience of female youth soccer players in the United States through: (i) Improving the competitive environment through creation of a true national competitive league; (ii) Improving the process for identifying elite female soccer players for the U.S. Soccer youth national teams through a systematic scouting and identification program based on national competitions; and (iii) improving the daily training environment at top female youth soccer clubs through developing best practices and training and organizational guidelines for its member clubs. The ECNL is sanctioned by US Club Soccer and is sponsored by Nike Soccer. The Army National Guard is the Official Military Branch of the ECNL.

About the Army National Guard: The National Guard serves both state and federal mission requirements. While Guard units are combat-trained and can be deployed overseas, their primary mission is to serve in their home communities in support of disaster relief efforts such as Hurricane Katrina and Hurricane Sandy—training just one weekend per month, and one two-week period each year. Whether the call is coming from the State Governor or directly from the President of the United States, Guard Soldiers are always ready and always there.