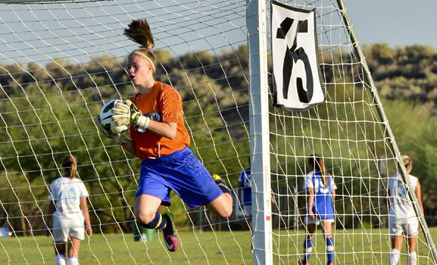 RICHMOND, VA (December 7, 2012): Some teams are gearing up for the upcoming Showcase in Florida while others are getting ready to head into break for winter. Check out some highlights from this weekend’s games including the top offense in the nation and a difficult opponent for a team with a perfect record.

FC Dallas has the chance to jump into the second spot in the Texas Conference with a pair of wins over the weekend. FC Dallas, the only U14 team in the country to play twice this weekend, faces Lonestar SC on Saturday and Texas Rush on Sunday. Both games should be competitive, but the clash on Sunday pits the second place team in the conference against the third place team. FC Dallas will be counting on striker Ariel Diaz to continue her hot start to the season. Diaz has nine goals in her first eight games.

In the Midwest Conference, Eclipse Select Soccer Club hosts SLSG-Metro on Saturday. This is the last game for nearly three months for both teams, as they head into winter break. Eclipse currently sits in the second spot in the conference behind Michigan Hawks. SLSG-Metro is in fifth, but has won two of its last three.

Players Development Academy, annually one of the strongest clubs in the nation, joins ECNL play this weekend with games against East Meadow Soccer Club and Albertson SC. PDA is getting in gear for the Showcase Event in Florida at the end of the month.

In the Southeast Conference, Concorde Fire is trying to keep its undefeated start to the season alive when it takes on local rivals Atlanta Fire and Gwinnett Soccer Association this weekend. The forward trio of Brook Colangelo, Katie MacGinnitie, and Gabriela Rivera has combined to score 28 goals this year for the Concorde squad.

FC Virginia hits the road this weekend with its perfect record on the line. FC Virginia is 6-0-0 with 21 goals score and 0 goals conceded through the first three months. This weekend, the top team in the Midatlantic Conference heads to Indiana for games against Carmel United and Ohio Elite Soccer Academy.

Oklahoma(w) commit Chelsea Jackson and Texas A&M(w) commit Mikaela Harvey are battling it out for the top scoring honors on the Lonestar SC squad. Jackson, the forward, and Harvey, the midfielder, are both level on eight goals a piece heading into this weekend’s game against FC Dallas.

Gwinnett Soccer Association is trying to close the gap on Orlando City YS in the Southeast Conference this weekend. GSA has games against Birmingham United and Concorde Fire while OCYS sits idle. GSA’s Elia Stevens continues to set the pace for top setup players in the country with 12 assists in 12 games.

In the Northeast, Soccerplus Connecticut gets its first taste of ECNL action this weekend with a game against FC Stars of Massachusetts. Stars are only in their second week of the season, so there should not be a huge advantage for either side.

The balanced attack of Sporting Blue Valley continues to lead the nation in goals per game with 34 goals in eight games. The Kansas club is facing off against SLSG on Saturday in a Midwest Conference showdown. Missouri(w) commit Savannah Trujillo and U.S. youth national team midfielder Dorian Bailey are tied for top honors on the squad in points scored with six goals and four assists a piece.

McLean Youth Soccer makes the trek out to Ohio and Indiana this weekend with games against Ohio Elite Soccer Academy and Carmel United. McLean is currently in second place in the Midatlantic Conference after a 5-1-1 start to the season.

CASL Chelsea Ladies hit the road this weekend for a game against Charlotte Soccer Academy on Sunday. Last week, CASL defeated VSI West FL Flames 11-0, so the Charlotte defense will need to be sharp to keep this contest competitive.

ECNL Recap: Out with the old, in with new